From the President’s Desk: Roaring into 2016 – Setting the World's Stage for Huge Efficiency Gains! | Alliance to Save Energy
Skip to main content
12/23/15 : Kateri Callahan

From the President’s Desk: Roaring into 2016 – Setting the World's Stage for Huge Efficiency Gains! 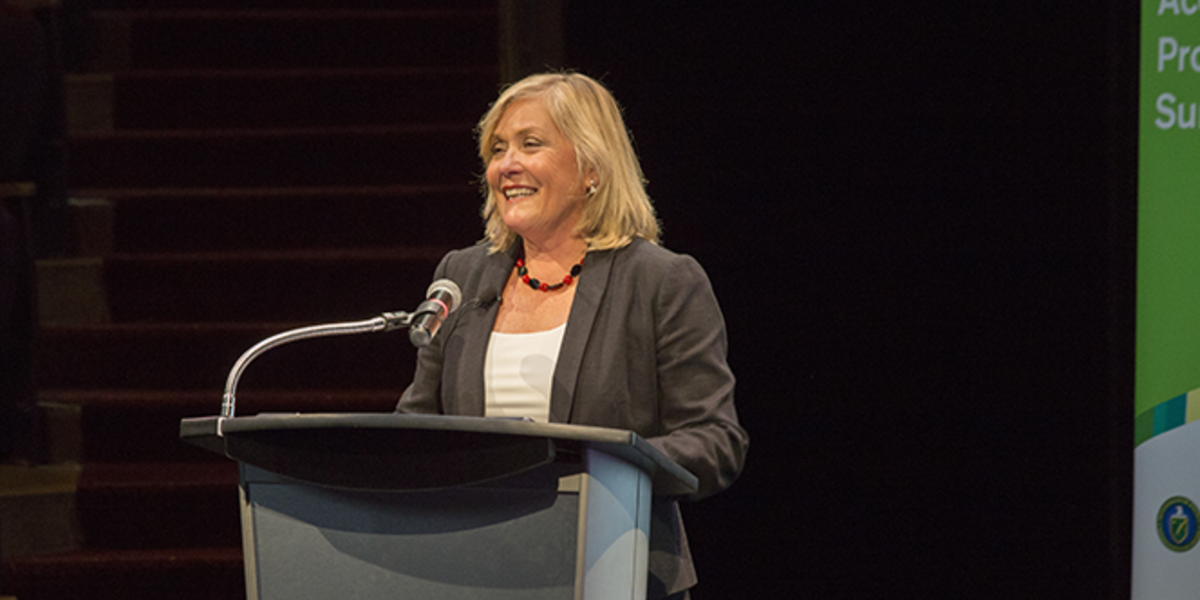 Happiest of holidays to you all and a HUGE thank you from all of us at the Alliance for helping to make 2015 full of critical policy wins for our cause – truly a year for the energy efficiency record books! And, as we prepare to cross this mid-point in our self-proclaimed Decade of Energy Efficiency, I predict that 2016 will bear witness to even greater increases in the energy productivity of businesses, governments and economies around the world. This final note to you in 2015 takes a quick peek back at just some of the highlights of the year; if I had reported on all, you would be reading into the new year!

I also, and most importantly, write to recognize and thank those who have brought us to this historic point in our organization’s 38-year history. The Alliance’s board of directors and honorary congressional board members is a peerless group of leaders, and their passion for advancing energy efficiency is unparalleled; our 130-strong Associate members represent global companies, energy providers, trade associations and non-profits whose diverse nature and hard work have created a compelling, single voice for advancing energy efficiency; the community of energy efficiency interest and environmental groups that work closely to set common agendas, messaging and strategy greatly improve our prospects for success; and, of course, at the heart of it all are the talented, creative and hard-working Alliance staff.

But, advocates are only one-half – albeit a very important one-half – of the winning equation! The successes reported here would not be possible without dedicated and hard-working policymakers, regulators and government officials that champion the cause of energy efficiency. From the President, to the Congress, to state houses and regulatory commissions across the U.S., to their counterparts around the world, there is growing recognition that energy efficiency is the world’s most abundant, cleanest, most cost-effective and most readily deployed energy resource. And, deploying it they are!

A Season of Energy Efficiency Gifts

The media frenzy last week was over provisions of the omnibus bill designed to support deployment of renewable energy technologies and to allow for exports of oil, but the bill also delivered an early gift of energy efficiency tax incentives to help consumers and businesses invest in products and technologies that will return energy and dollar savings. The omnibus appropriations and tax extenders bill reinstates a tax incentive of up to $500 for families that purchase qualifying energy efficiency products; provides home builders and/or manufacturers up to $2,000 for building energy efficient homes; provides a tax deduction to encourage efficiency upgrades of commercial buildings; and, makes permanent the tax credit for investments in research and development.

Too little media attention also was given to the December announcement of historic energy efficiency standards for commercial air conditioners and furnaces. Energy and dollar savings from these latest standards are more than double that of any standard that has been issued to date, and join several other new standards put into place in 2015. The now more than 40 household and commercial product efficiency standards issued during President Obama’s tenure will save almost $535 billion and decrease greenhouse gas emissions by more than two billion metric tons through 2030.

On the international front, history was made at the United Nation’s COP21 climate change summit in Paris. With a 195-nation international agreement on climate change now in place, efficiency can help drive the carbon reduction process as the fastest, easiest and most cost-effective path to meeting CO2 emissions reduction goals. And, the U.S. joined with 19 other countries under the banner of Mission Innovation to pledge a doubling in investment to transform the global energy economy. This historic agreement was coupled with the creation of a private sector-led Breakthrough Energy Coalition that has pledged unprecedented investment in early-stage R&D.

EPA made history this year with the issuance of the Clean Power Plan (CPP) to reduce CO2 emissions from fossil fuel power plants in the U.S. by 32 percent by 2030 compared to 2005 levels. This new regulation allows and encourages use of energy efficiency as a compliance strategy and creates the Clean Energy Incentive Program (CEIP), a voluntary, early-action complement to the CPP that gives extra credit for energy efficiency deployment in low-income communities. The job now is to help enlighten states, commissions and companies that energy efficiency is the cheapest, quickest compliance strategy.

Significant progress was made in 2015 both domestically and internationally towards the Alliance’s goal of doubling energy productivity. At home, our partnership with DOE and the Council on Competitiveness (COC) made waves with Energy Secretary Moniz’ public unveiling of Accelerate Energy Productivity 2030: A Strategic Roadmap for American Energy Innovation, Economic Growth, and Competitiveness (Roadmap). Directly influenced by a series of public dialogues and executive roundtables held around the country as part of the partnership, the Roadmap demonstrates clearly that it is possible to double energy productivity without increasing the amount of energy we use to do so. And, the rewards of making this new American energy future a reality are significant — from creating over a million new jobs to reducing consumers’ energy bills by over $1,000 a year – all while simultaneously achieving huge reductions in greenhouse gas emissions.

In the international arena, the Alliance launched the Global Alliance for Energy Productivity earlier this year in May, kicking off a broad set of activities to promote public and private sector commitments to doubling energy productivity around the world. As the secretariat of the Global Alliance, the Alliance developed partnerships with influential global initiatives – e.g., Sustainable Energy for All (SE4All), the International Partnership for Energy Efficiency Cooperation, and the We Mean Business Coalition – to provide information, tools, and outreach on energy productivity issues; participated in numerous high-profile international events (including the 6th Clean Energy Ministerial in Mexico and the UNFCCC COP21 in Paris) to publicize U.S. policy achievements and promote partnerships and synergies with public and private efforts around the world; and laid the groundwork for working with other national and subnational governments (e.g., in India, Europe, China, and Brazil) to develop policy roadmaps for doubling energy productivity. 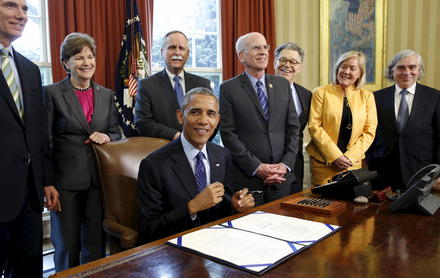 And let’s not forget the excitement of the first energy bill signed during President Obama’s tenure, the Energy Efficiency Improvement Act, S. 535, a bipartisan bill focusing on the built environment that will create new jobs and reduce CO2 emissions while yielding approximately $4.6 billion in annual energy savings by the year 2030. The Alliance is confident that the passage of S. 535 has set the stage for bipartisan action on energy efficiency legislation in the form of the Energy Savings and Industrial Competitiveness Act that is sponsored by four of the Alliance’s honorary congressional members: Senators Portman (R-Ohio) and Shaheen (D-N.H.), Congressmen McKinley (R-W.Va.) and Welch (D-Vt.), all of whom are pictured here with the President and the Energy Secretary (and me!). The bill has overwhelming bipartisan support and the capacity to create 192,000 jobs, produce energy savings worth $16.2 billion annually and reduce annual carbon dioxide emissions by 95 million metric tons. In short: this is a “must-pass” bill for 2016.

Moving Forward: 2016 and Beyond

I am anxious to begin the new year and the Alliance’s new agenda for 2016. Look to us to continue our partnership with DOE and the Council on Competitiveness to Accelerate Energy Productivity in the U.S., as well as our efforts through the Global Alliance on Energy Productivity to engage businesses and governments around the globe in the mission to double energy productivity. Look to us as well to continue to work with you to drive action in the Congress and the Administration and to ensure that implementation of the Clean Power Plan by the states is done in a way that deploys energy efficiency widely and at-scale. You also can look to us to continue to innovate and bring new and bold ideas for advancing energy efficiency to the forefront – from establishing CarbonCountTM, our CO2 scoring system for green bonds, to launching a new effort directed at securing utility rate regulations that drive investment in energy efficiency.

Stay Tuned and Stay With Us!

Let me conclude the same way I began, with much gratitude to all of you who have worked and succeeded in making 2015 such a banner year for energy efficiency. On behalf of the Alliance’s leadership – the president of Dow Building and Construction Jane Palmieri, our industry co-chair, and Senator Jeanne Shaheen, our honorary chair and myself – our most heartfelt thanks go out to our board members, Associates, friends and colleagues for their strong support throughout the year. As we forge ahead in our mission to create more energy productive homes, businesses, factories, buildings, cities and economies, we will look to you – our champions and allies – to play a vital role in the advancement of this important work.

Here’s to an (energy) productive and prosperous new year!

Alliance to Save Energy President