Jeanne Shaheen | Alliance to Save Energy
Skip to main content 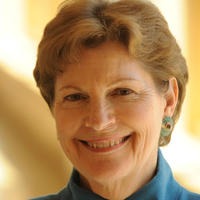 Although neither of Senator Shaheen’s parents graduated from college, her father worked his way up to a management position in the shoe manufacturing business and her mother worked as a secretary in their local church. They instilled in their daughter the values of determination and hard work that have guided her throughout her life. After attending public schools, Senator Shaheen received a bachelor's degree from Shippensburg University in Pennsylvania and a master's degree from the University of Mississippi.

A champion of middle class families, as Governor, Shaheen worked to make college more affordable, made public kindergarten a reality for over 25,000 additional children, and extended affordable health coverage to tens of thousands of New Hampshire children. Her focus on the economy led to the creation of nearly 67,000 new jobs during her six years as Governor and the third-highest high tech employment in the nation. Recognizing that for New Hampshire’s middle class to prosper we must be able to compete in an increasingly global economy, she was the first New Hampshire Governor to lead a trade mission outside of North America. A former small business owner, Jeanne Shaheen understands that small businesses are the backbone of the New Hampshire economy.

Never afraid to stand up to powerful interests, Jeanne Shaheen took on the utilities and led the fight to bring competition to the New Hampshire electric industry. She stood up to the insurance industry, first as a State Senator, when she championed legislation to prevent premium discrimination against small businesses that employ sick or older workers, and then as Governor, when she pushed through her HMO Accountability Act.

A consensus builder, Shaheen brought Republicans and Democrats in the New Hampshire legislature together to pass the Clean Power Act, first-in-the-nation legislation reducing power plant emissions, and the Land and Community Heritage Investment Program, which has helped preserve 250,000 acres of open space and 88 historic places. Energy efficiency programs initiated by the Shaheen administration have saved New Hampshire families and businesses over $400 million.

Shaheen also signed historic civil rights laws, including legislation making New Hampshire only the 10th state to add sexual orientation to its anti-discrimination laws and establishing a Martin Luther King, Jr. Day – ending New Hampshire’s status as the only state in the nation not to recognize Dr. King’s birthday as an official holiday.

In 2005 she took on the challenge of forging a new generation of public leaders when she became the Director of Harvard University’s Institute of Politics at the Kennedy School of Government.

Shaheen was sworn-in as a member of the United States Senate in January 2009. She currently serves on the U.S. Senate Committees on Armed Services, Foreign Relations, Appropriations, and Small Business and Entrepreneurship.