Peter Welch | Alliance to Save Energy
Skip to main content 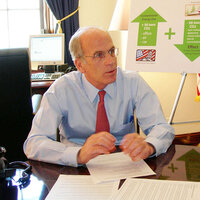 Peter Welch has been a champion for working Vermonters throughout his distinguished career as a state legislator and Member of Congress. Since his election to Congress in 2006, he has been widely recognized in Washington as a skillful and effective legislator.

Peter’s solid record of accomplishment reflects his strong commitment to bringing people together to find real solutions to the difficult challenges facing our state and nation. In a climate of gridlock and partisanship, he has worked across the aisle in Congress to create jobs, make college and health care more affordable, balance the budget fairly, increase energy efficiency, end the wars in Iraq and Afghanistan, and take care of our veterans.

Peter settled in White River Junction, Vermont and worked as a public defender before founding a small law practice. He was first elected to represent Windsor County in the Vermont Senate in 1980. In 1985, he was unanimously elected by his colleagues to lead the chamber, becoming the first Democrat in Vermont history to hold the position of President Pro Tempore.

After a break from electoral politics during the 1990s, Peter returned to the Vermont Senate in 2002 when he was appointed by Governor Howard Dean to fill an open seat. He was quickly selected by his colleagues to once again lead the Senate as President Pro Tempore.
In 2006, Peter was elected to Vermont’s sole seat in the United States House of Representatives. The 2006 campaign gained nationwide attention for being the only contested congressional race in the country where both candidates agreed not to run negative ads. Peter was re-elected by wide margins in 2008 and 2010.

As a member of the House, Peter has championed legislation to make homes and buildings more energy efficient, make college affordable, and expand access to health care. He took on big banks and credit card companies who were ripping off small businesses and consumers. And he fought to block efforts to repeal health care reform, give tax breaks to millionaires and big oil companies, and restrict a woman’s right to choose.

In 2011, Peter was appointed to serve as a Chief Deputy Whip of the House Democratic Caucus. He serves on the Committee on Energy and Commerce.

Peter is married to Margaret Cheney, a Vermont state representative. They share a home in Norwich, Vermont.