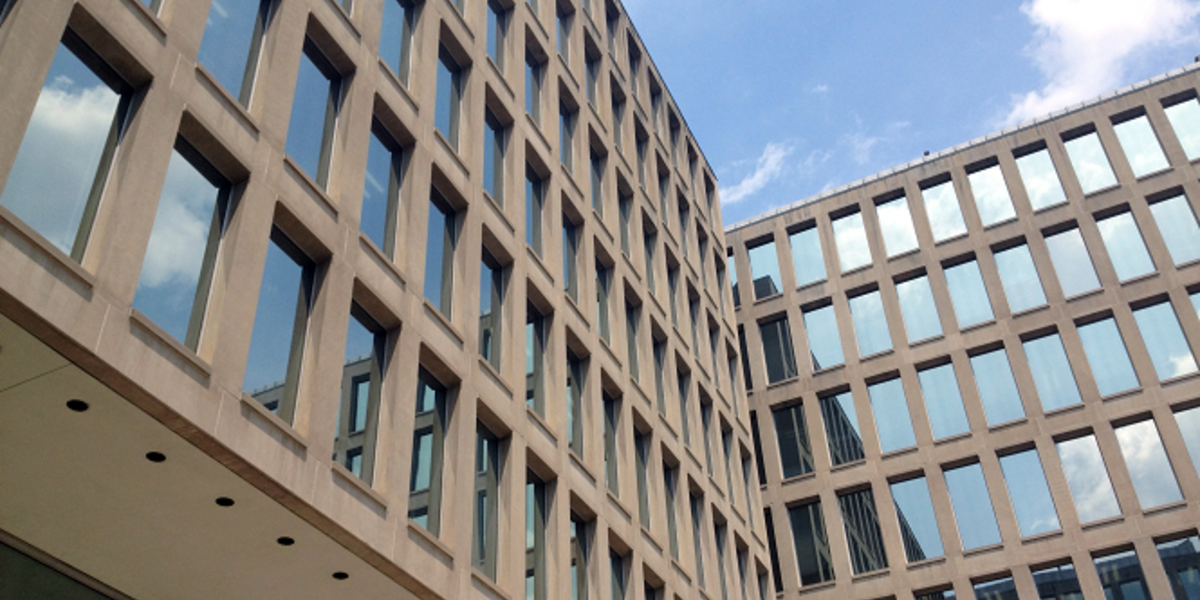 The Friday afternoon media dump is a Washington, D.C. tradition, a maneuver intended to tamp down media coverage over potentially controversial news, such as the Black Friday release of the Fourth National Climate Assessment. Why the federal government buried a noncontroversial and significant accomplishment of a stated objective of both the President and Congress the week before, though, is befuddling.

The Federal Energy Management Program (FEMP), which was targeted for significant budget cuts in the President’s Budget Requests (cuts rejected by Congressional appropriators each of the past two fiscal years), posted notice (with no news release) that 10 agencies invested a record amount of funding in federal infrastructure in 2018 by entering into energy savings performance contracts (ESPCs) that will not only improve the performance of federal buildings, but are also guaranteed to save taxpayers $1.7 billion over the course of the 23 contracts. With ESPCs, a private energy service company (ESCO) installs highly-efficient equipment and systems that help tame the energy consumption of buildings.

What’s more, DOE estimates this batch of ESPCs will create 6,475 job-years in good paying positions in engineering, construction trades, and manufacturing. The environmental and climate implications are also stunning: by improving buildings’ performance, the U.S. will save nearly 325 million gallons of water and avoid generating the equivalent energy usage of 25,800 homes or 49,000 cars. 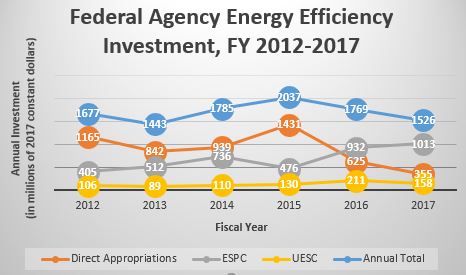 (Adapted from CRS. Note: FEMP manages the DOE’s indefinite delivery, indefinite quantity (IDIQ) ESPC program, which made the recent announcement highlighting specific projects. These are not the only ESPCs federal agencies may award. Numbers in this graphic may reflect higher investment numbers due to inclusion of non-IDIQ ESPCs.)

That’s a Good Thing. Why Hide It?

The Alliance is thrilled to see agencies quietly taking actions that continue to reduce our nation’s energy demand and the resultant greenhouse gas emissions of federal buildings. In fact, there are “wins” enough here for everyone to celebrate: job creation, energy waste reduction, taxpayer savings, increased energy security, improved reliability and resilience, and public-private partnerships that address the maintenance backlog of a large portion of the nation’s vital public infrastructure at no upfront cost to the federal government. Why not trumpet that? It’s important to mark our successes.

Unfortunately, continued action – quiet, steady or otherwise – is not a given and can quickly devolve into wasted opportunity (and continued energy waste). Agencies are ultimately executive branch bodies that receive their authority from Congress but their ambition from the Oval Office. Agencies must rely on specific guidance from the administration if we the people are to expect diligence. To that end, executive proclamations must be precise in their goals and targets to provide metrics for judging successful outcomes. When success is neither defined in statute nor laid out in specific terms from the executive, then any progress is merely relative and lacks long-term accountability.

Agency accountability here is notably more important because the federal government is the single largest energy consumer in the United States, and buildings account for nearly 40 percent of the government’s energy use. Although the federal government has decreased its energy intensity by nearly 50 percent since 1975, there has recently been room for improvement in federal leadership in energy performance.

The statutory targets for energy efficiency of federal buildings set by Congress under the Energy Independence and Security Act (EISA) of 2007 expired at the end of FY 2015. The Obama Administration issued Executive Order 13693 in March 2015 to fill that void. Targeted reductions in energy intensity of federal buildings were not only extended through 2025 but were also buttressed with specific sustainability metrics and greenhouse gas reductions goals for facilities and fleets.

In contrast, the President’s E.O. 13834, issued in May, stopped short of the aggressiveness required to meet the need for investment in energy efficiency in federal buildings. While announcing soft goals such as “achieve and maintain annual reductions in building energy use and implement energy efficiency measures that reduce costs,” and “utilize performance contracting to achieve energy, water, building modernization, and infrastructure goals,” the document was short on hard details and silent on sustainability metrics. It instead revoked the specific annual energy intensity reduction targets of 2.5% from its predecessor.

In a June blog post, the Alliance noted the absence of a clear plan from the administration. Six months later, agencies must still rely on outdated guidance to implement the order. That’s frustrating, given the appetite for ESPCs displayed by some federal agencies, especially the Department of Defense, and a government-wide focus on increasing resilience and addressing some of the $165 billion maintenance backlog. 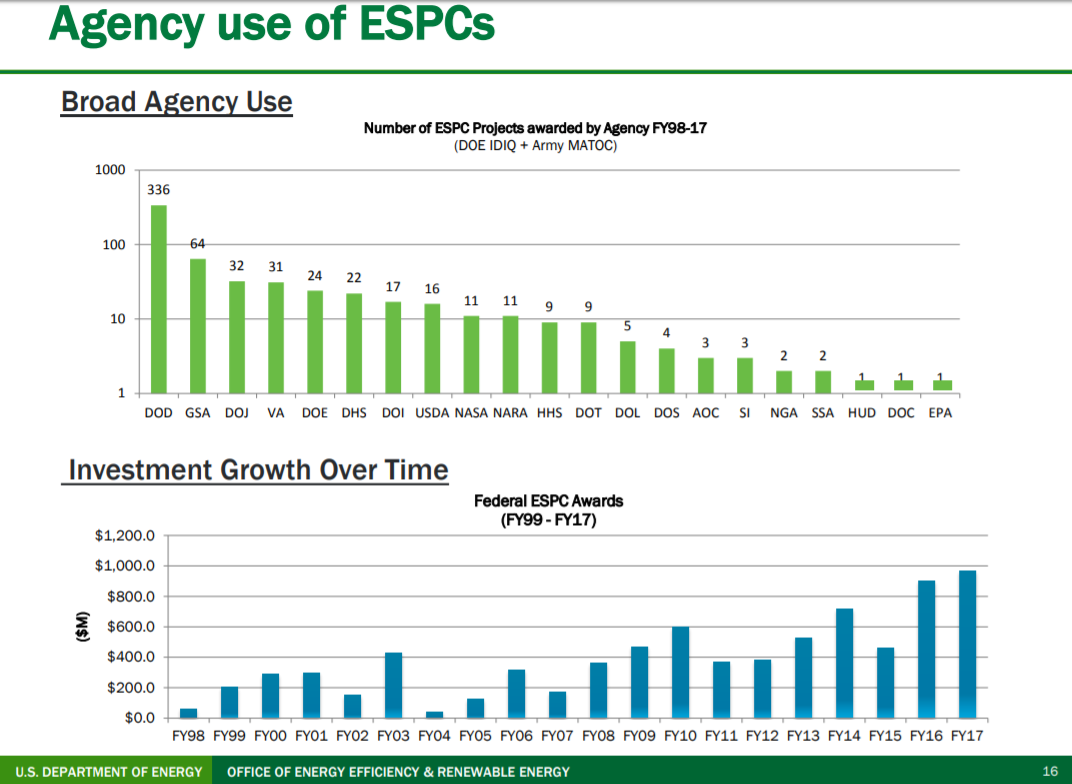 The administration’s burial of this announcement is also frustrating given bipartisan Congressional support shown for ESPCs as a mechanism to inject private capital into public infrastructure improvements. In 2016, the Senate passed a comprehensive energy bill that would have codified the annual 2.5% energy reductions (Section 1017) by an overwhelming 85-12 margin. Identical language remains in the Senate’s current bipartisan effort, the Energy and Natural Resources Act.

Congress has recognized that ESPCs and similar utility energy service contracts (UESCs) are an attractive financing mechanism that can upgrade and improve the performance of the existing building stock without the need for upfront appropriations. The energy savings guaranteed average around 20 percent and are shared between the agencies and ESCOs over the life of the contracts, which average around 17 years. After the contracts expire, the government captures the full utility savings and reduced maintenance costs of newer equipment, which compounds to as much 197 percent of the initially-guaranteed savings.

To smooth adoption, Congress rectified an accounting issue in the Congressional Budget Office (CBO) which had limited the ability of agencies to enter ESPCs and UESCs. The CBO had previously not recognized the attendant savings, which often were realized outside of the 10-year budget window CBO analyzes for costs, but the problem was fixed with House passage of the FY 2018 budget agreement. 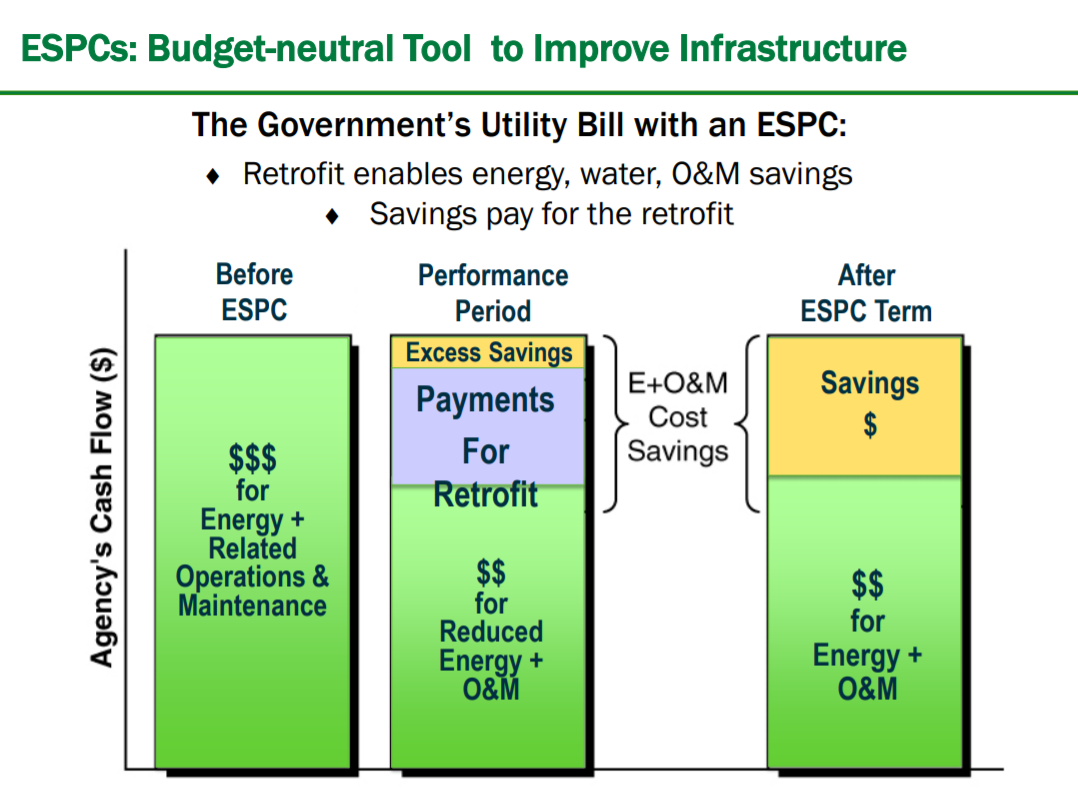 The Alliance was happy to discover the notice that FEMP helped save taxpayers money through record ESPCs, and we encourage more of these successful partnerships. Going one step further to identify interim energy savings targets pending statutory targets would be even better. Rest assured, the Alliance will monitor DOE and OMB for progress in this area. Until then, we’ll spread some cheer.

Whether it’s the Congressional appropriators who rejected proposed cuts to FEMP’s budget and recognized its ability to “leverage more private sector investment in aging Federal facilities and infrastructure” (Senate FY 2019 Appropriations Committee Report) and “advance cost-effective solutions to reduce energy consumption through increased efficiency,” (House FY 2019 Appropriations Report), or whether it’s the administration’s quest to leverage private capital to replace federal spending on infrastructure – let’s be honest, it doesn’t matter who gets the credit.

That’s a win-win-win, not something for a Friday news dump.