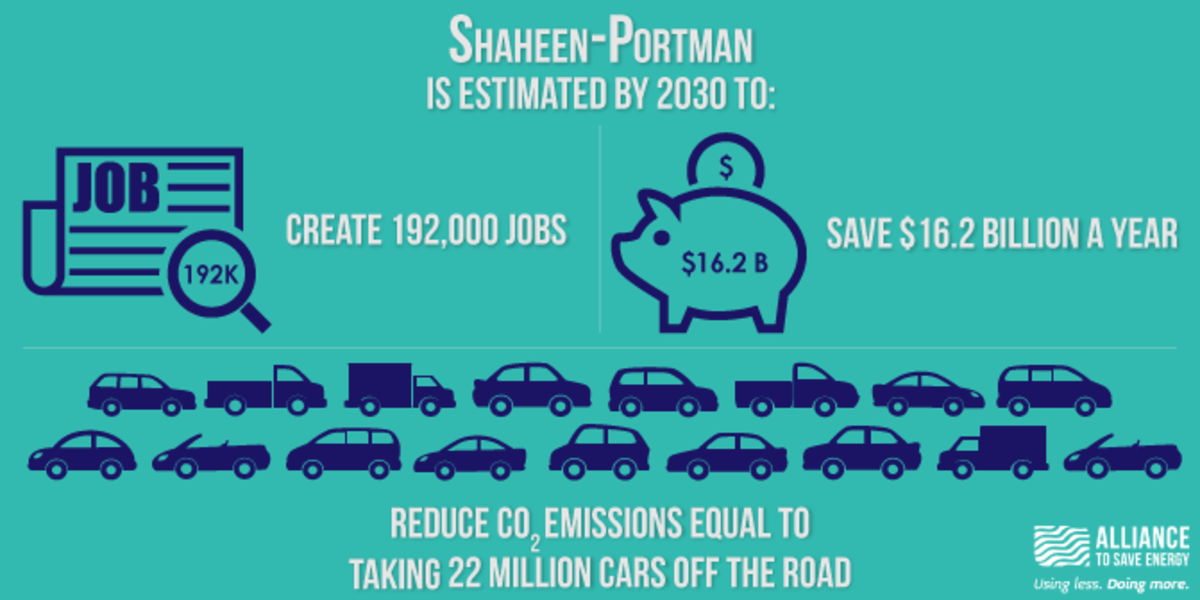 Senators Shaheen (D-N.H.) and Portman (R-Ohio) have reintroduced the Energy Savings and Industrial Competitiveness Act (Shaheen-Portman). This new bill, S.2074, incorporates ten new provisions into the body of the legislation.

The original Shaheen-Portman bill contained provisions on building codes, industrial efficiency, and federal agency efficiency that would cut energy costs, enhance energy security, and reduce emissions. This new package goes even further, bringing the benefits of energy efficiency to schools, households, and businesses across the country. The new bill is estimated to save Americans $16.2 billion annually, create 192,000 jobs, and avoid 95 million metric tons of CO2 —the equivalent of taking 22 million cars off the road—by 2030.

Below is a list of the 10 new provisions that have been “baked in” to Shaheen-Portman. The Alliance looks forward to working with Sens. Shaheen and Portman, Senate leadership, and other stakeholders to advance this bipartisan, commonsense bill in the weeks ahead!

This provision would help schools invest in energy efficiency upgrades. The Department of Energy (DOE) would coordinate and simplify the scope of existing federal energy efficiency programs available to schools and provide guidance on financing options. It is estimated to reduce CO₂ emissions by 15.50 MMT and save $2.21 billion by 2030. This section was originally introduced by Sens. Udall (D-Colo.) and Collins (R-Maine.) as the Streamlining Energy Efficiency for Schools Act.

Provision located in Title I, Subtitle C of the bill (link to bill text)

This provision would advance a voluntary, market-driven approach to aligning the interests of commercial building owners and their tenants to reduce energy consumption. This provision would establish a Tenant Star program—a voluntary certification and recognition program—within Energy Star to promote energy efficiency in separate spaces. DOE would also be required to complete a study on feasible approaches to improving the energy efficiency of tenant-occupied spaces in commercial buildings. It is estimated to reduce CO₂ emissions by 11.75 MMT and save $1.96 billion by 2030. This section was originally introduced by Sens. Bennet (D-Colo.) and Ayotte (R-N.H.) as the Better Buildings Act.

Provision located in Title I, Subtitle D of the bill

This provision would build upon existing law by requiring federally leased buildings to benchmark and disclose their energy usage data. It also authorizes DOE to conduct a study on benchmarking methodologies and establishes a competitive grant program for utilities to make building energy use data available to building owners. It is estimated to reduce CO₂ emissions by 7.92 MMT and save $0.77 billion by 2030.  This provision is based on a benchmarking bill sponsored by Sen. Franken (D-Minn.).

Provision located in Title I, Subtitle E of the bill

This provision would require the federal government to increase the efficiency of its data centers. It would direct the Office of Management and Budget to collaborate with each federal agency to create a strategy for the maintenance, purchase, and use of energy-efficient and energy saving information technologies, and then track and report on each agency’s progress. This amendment would also implement several other measures with a focus on improving the energy efficiency of federal data centers. It is estimated to reduce CO₂ emissions by 0.69 MMT and save $1.64 billion by 2030. This section is based on the Energy Efficient Government Technology Act, sponsored by Sens. Udall (Colo.) and Risch (R-Idaho).

Provision located in Title III, Sec. 303 of the bill

This provision would authorize HUD to use performance-based contracts to conduct energy and water efficiency upgrades to HUD-assisted multifamily housing. This provision is based an amendment originally introduced by Sen. Whitehouse (D-R.I.).

Provision located in Title III, Sec. 304 of the bill

This provision would revise requirements for businesses submitting their products for third-party testing to achieve Energy Star certification. This provision is based an amendment originally introduced by Sens. Landrieu (D-La.) and Wicker (R-Miss.).

Provision located in Title IV, Subtitle A of the bill

This provision would ensure that the green building ratings systems used by the General Services Administration (GSA) do not exclude certain building materials. DOE would be required to conduct an ongoing review into private sector green building certification systems and to work with other agencies to determine which certification system would encourage the most comprehensive and environmentally sound approach to certifying buildings. This provision is based an amendment originally introduced by Sens. Landrieu (D-La.), Wicker (R-Miss.), and Pryor (D-Ark.).

Provision located in Title IV, Subtitle B of the bill

This provision would create an exemption for thermal storage water heaters under the new efficiency standards that go into effect in April 2015. Large grid-enabled electric-resistance water heaters could continue to be manufactured only if they include capabilities that allow them to be used in electric thermal storage or demand response programs. This section is based on the Water Heater Efficiency Act originally introduced by Sens. Hoeven (R-N.D.) and Pryor (R-Ark.).

Provision located in Title IV, Subtitle C of the bill

This section contains a number of provisions to improve energy efficiency in federal buildings. It also requires federal mortgage agencies to include energy efficiency as a factor in determining the value and affordability of a home. This provision combines a revised version of the All-of-the-Above Federal Building Energy Conservation Act, introduced by Sens. Hoeven (R-N.D.) and Manchin (D-W.Va.), and the SAVE Act, sponsored by Sens. Bennet (D-Colo.) and Isakson (R-Ga.).

Provision located in Title IV, Subtitle D of the bill

This provision would require DOE to recognize voluntary, independent certification programs for air conditioning, furnace, boiler, heat pump, and water heater products. DOE would be required to rely on data from qualifying independent certification programs when conducting routine testing of these products. In order to qualify, the certification program must be nationally recognized, provide annual reports of all test results, and maintain a publicly available list of all certified models, among other criteria. This provision is based on an amendment originally introduced by Sens. Sessions (R-Ala.) and Pryor (D-Ark.).

Alliance to Save Energy press statement

Alliance to Save Energy webinar slides

Text of the legislation 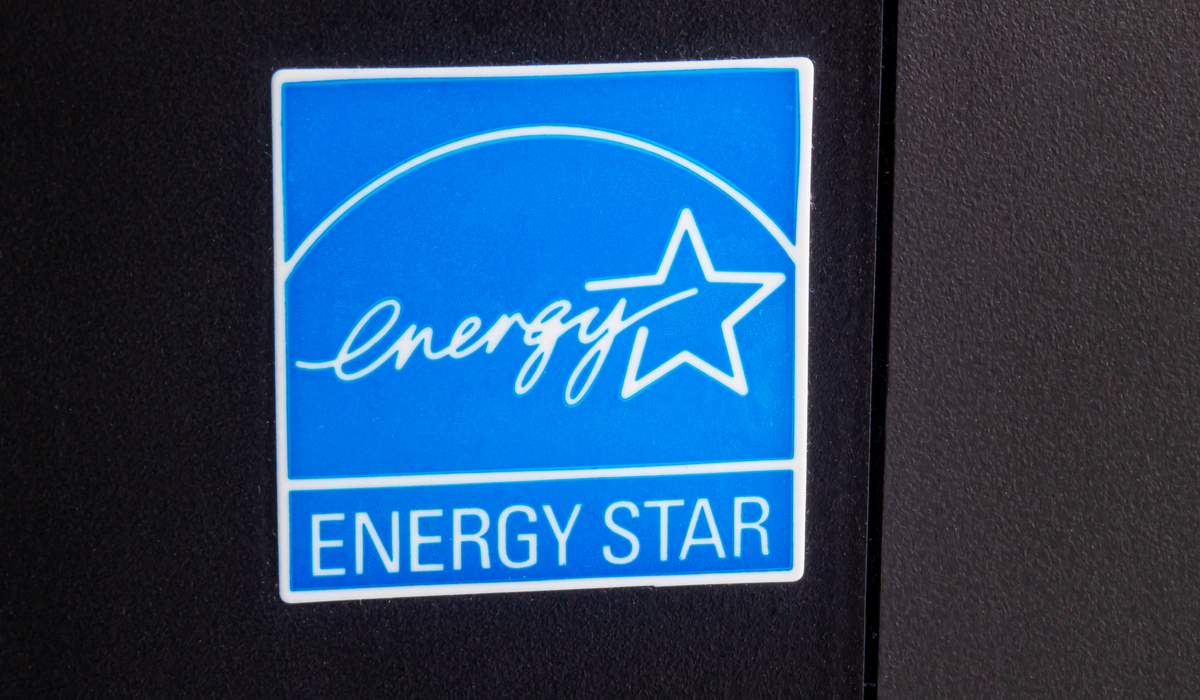 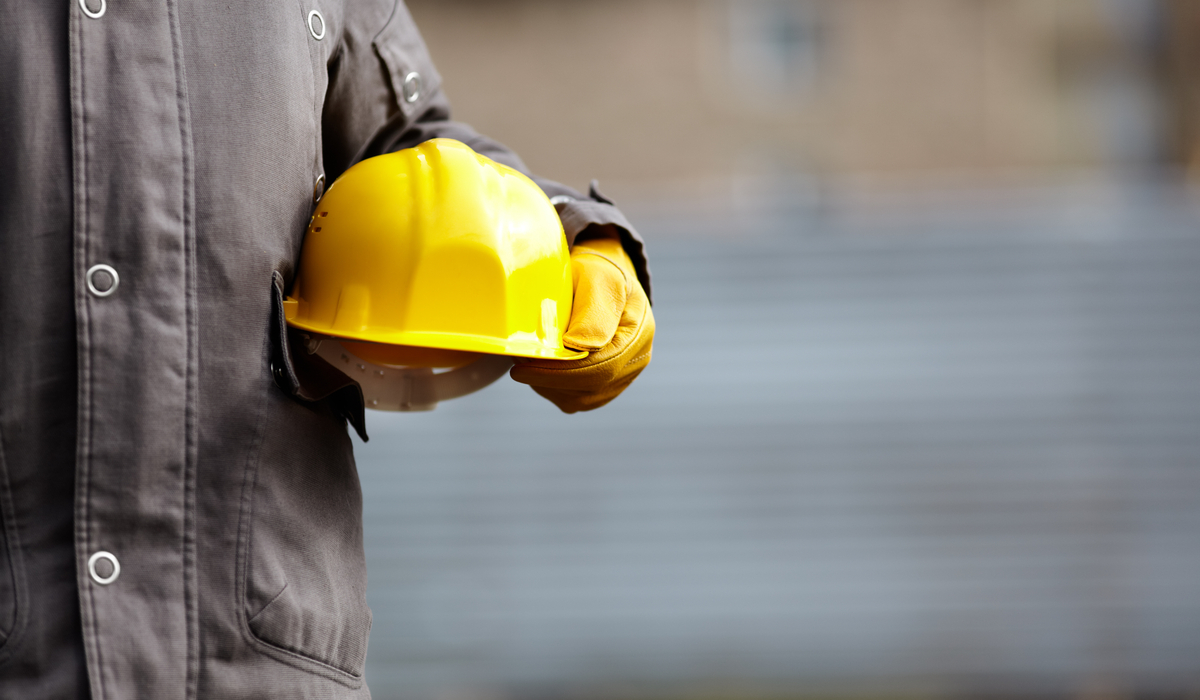