Summary of the Better Buildings Act 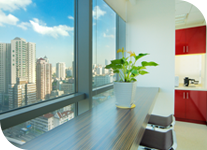 Summary of the Better Buildings Act

S.1191/H.R. 2126 would advance a voluntary, market-driven approach to aligning the interests of commercial building owners and their tenants to reduce energy consumption. This bipartisan legislation would save both energy and money, benefiting individual tenants, property owners and the community as a whole.

The Better Buildings Act would amend the Energy Independence and Security Act of 2007 to require the Department of Energy (DOE) to perform a study on feasible approaches to improve the energy efficiency of tenant occupied spaces (called “separate spaces”) in commercial buildings. The study would include consideration of:

Additionally, the proposal would direct the EPA, in consultation with DOE, to establish a Tenant Star program within ENERGY STAR to promote energy efficiency in separate spaces through a voluntary certification and recognition program. Further, the bill would direct the Energy Information Administration (EIA) to expand collection and dissemination of certain data through the Commercial Buildings Energy Consumption Survey, including information in support of Tenant Star.

Both bipartisan measures are fundamentally the same, with a few minor differences. The House version directs the General Services Administration (GSA), in consultation with DOE, to develop model leasing provisions for commercial buildings, while the Senate version does not. The Senate version also incorporates the original ENERGY STAR authorization from the Energy Policy Act of 2005 to divide the Tenant Star program responsibilities between the DOE and the EPA.