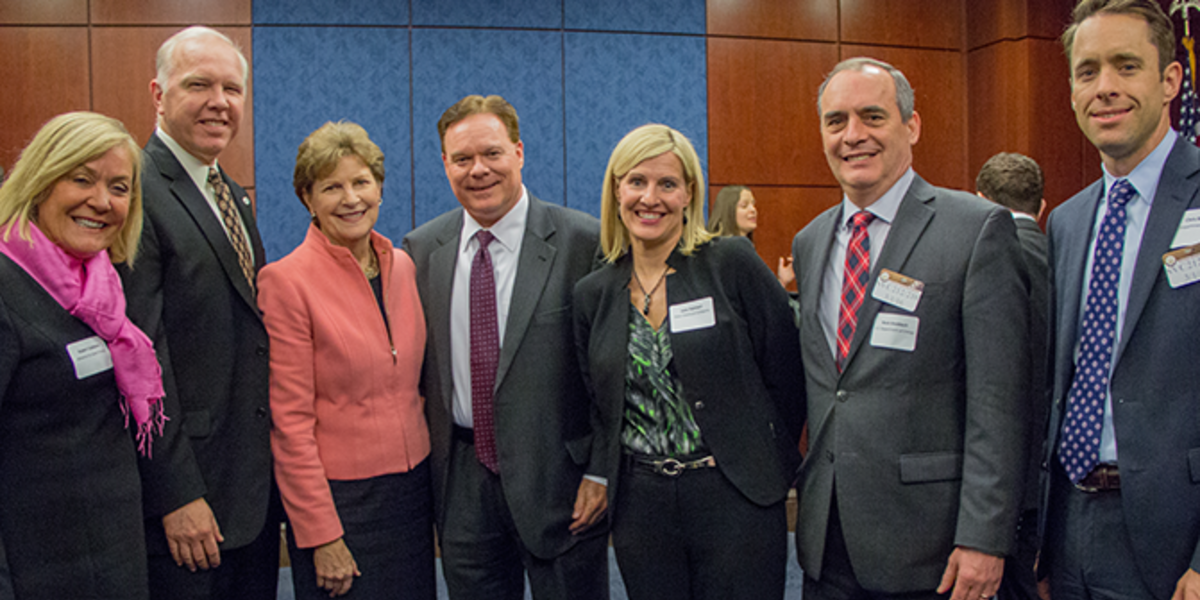 Since 2004, the Alliance to Save Energy has provided Unsung Hero Awards for those who go “above and beyond” on a daily basis to further energy efficiency, but who have not received recognition commensurate to their contributions. Through the 2016 Unsung Hero Awards, the Alliance is delighted to bring attention to the commendable work of four outstanding awardees. The Alliance was joined by key industry leaders at the March 1 Unsung Heroes Reception at the Capitol Visitor Center to honor the 2016 awardees.

From left to right: Robert Diznoff, Blaise Sheridan, Jennifer Loraine, and Christopher King (Photos by Alliance to Save Energy)

Before joining Senator Shaheen’s office, Diznoff was Energy Counsel for Senator Joe Manchin (D-W.V.), advising the Senator on all matters related to the Energy and Natural Resources Committee. Diznoff began his career on Capitol Hill working for the late Senator Robert C. Byrd and then as a Legislative Assistant for West Virginia’s interim Senator Carte Goodwin covering energy, environmental and labor issues. Diznoff has an undergraduate degree from the Ohio State University and a law degree from the University of Miami School of Law in Coral Gables, FL.

Christopher King is the Principal Deputy Assistant Secretary for the Office of Congressional and Intergovernmental Affairs at the U.S. Department of Energy. Here King provides strategic advice to the Secretary and Departmental leadership on engagement with the U.S. Congress, state, tribal, city and county governments, other Federal agencies, and key external stakeholders, enhancing the Department’s relationship with these decision-makers as central components of the national clean energy agenda.

King joined DOE in 2013 and has since served in a variety of capacities—most recently as a Senior Advisor in the Office of Energy Policy and Systems Analysis (EPSA) and prior to that as the Director of Policy and Analysis for the Office of Energy Efficiency and Renewable Energy (EERE). Before joining the Department, King spent over a decade on Capitol Hill, including as the Energy and Environment Subcommittee Staff Director for the U.S. House Science, Space and Technology Committee. During his tenure with the Committee, King was the chief advisor on Department of Energy matters and led a number of successful legislative initiatives, including passage of the America COMPETES Act and the establishment of the Advanced Research Projects Agency – Energy (ARPA-E). King is a proud Texan and graduate of the University of Texas at Austin. Blaise Sheridan serves as a Legislative Assistant in the Office of U.S. Senator Al Franken (D-Minn.), where his portfolio includes energy, environment, agriculture and innovation. Sheridan also serves as Sen. Franken’s advisor in his role on the Committee on Energy and Natural Resources. In his current role, Sheridan helps to advance the Senator’s energy efficiency and clean energy priorities, including a national energy efficiency resource standard and incentives for benchmarking building energy usage. Prior to this position, Sheridan served as Legislative Aide for Senator Chris Coons (D-Del.), where he covered energy, environment, agriculture, and transportation issues. Before his Senate tenure, Sheridan worked at the Environmental and Energy Study Institute (EESI) as an Energy and Climate Policy Associate. Sheridan has a Master’s Degree in Marine Policy from University of Delaware and a B.S. in Engineering from Swarthmore College.

In addition to the four Unsung Hero Awardees, Representative Steve Israel (D-N.Y.) was honored during the reception’s festivities with the Recognition of Service Award for his years of service to the Alliance and for his unwavering commitment to advancing energy efficiency policy during his tenure in the House. First elected in 2000, Rep. Israel has worked to promote energy security over his time in Congress and has identified energy efficiency as one of the key drivers to achieving it. Rep. Israel is a leader on U.S. energy security, reducing dependence on foreign oil, lowering energy costs and creating an innovative clean technology economy.