For President-elect Biden, Existing Federal Buildings Could Save Taxpayers Billions While Reducing Emissions | Alliance to Save Energy
Skip to main content

For President-elect Biden, Existing Federal Buildings Could Save Taxpayers Billions While Reducing Emissions

For President-elect Biden, Existing Federal Buildings Could Save Taxpayers Billions While Reducing Emissions 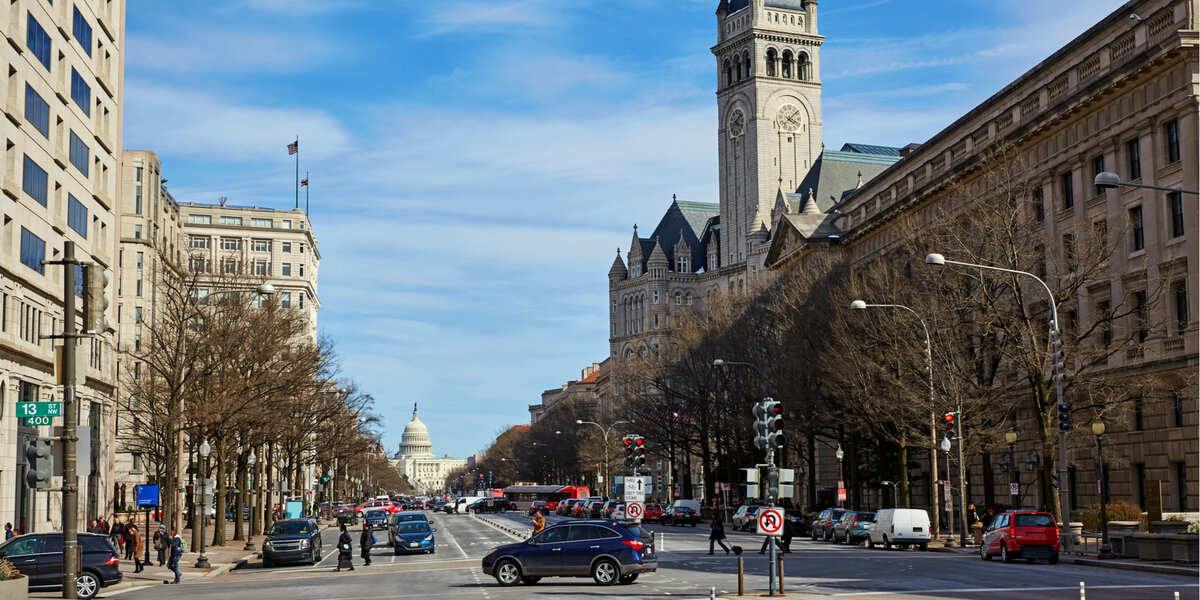 Recently, I looked at six administrative actions that President-elect Joe Biden can take to kickstart an energy-efficient agenda. Today, we take a deeper dive into the robust opportunity to accelerate decarbonization of the U.S. economy by improving the performance of the existing federal building stock.

The federal government has the opportunity and the responsibility to lead by example. The next administration can assert federal leadership by re-establishing forward-looking energy and water savings targets, coordinating plans and investments across agencies, and setting meaningful goals for agency participation in performance-based public-private partnerships. 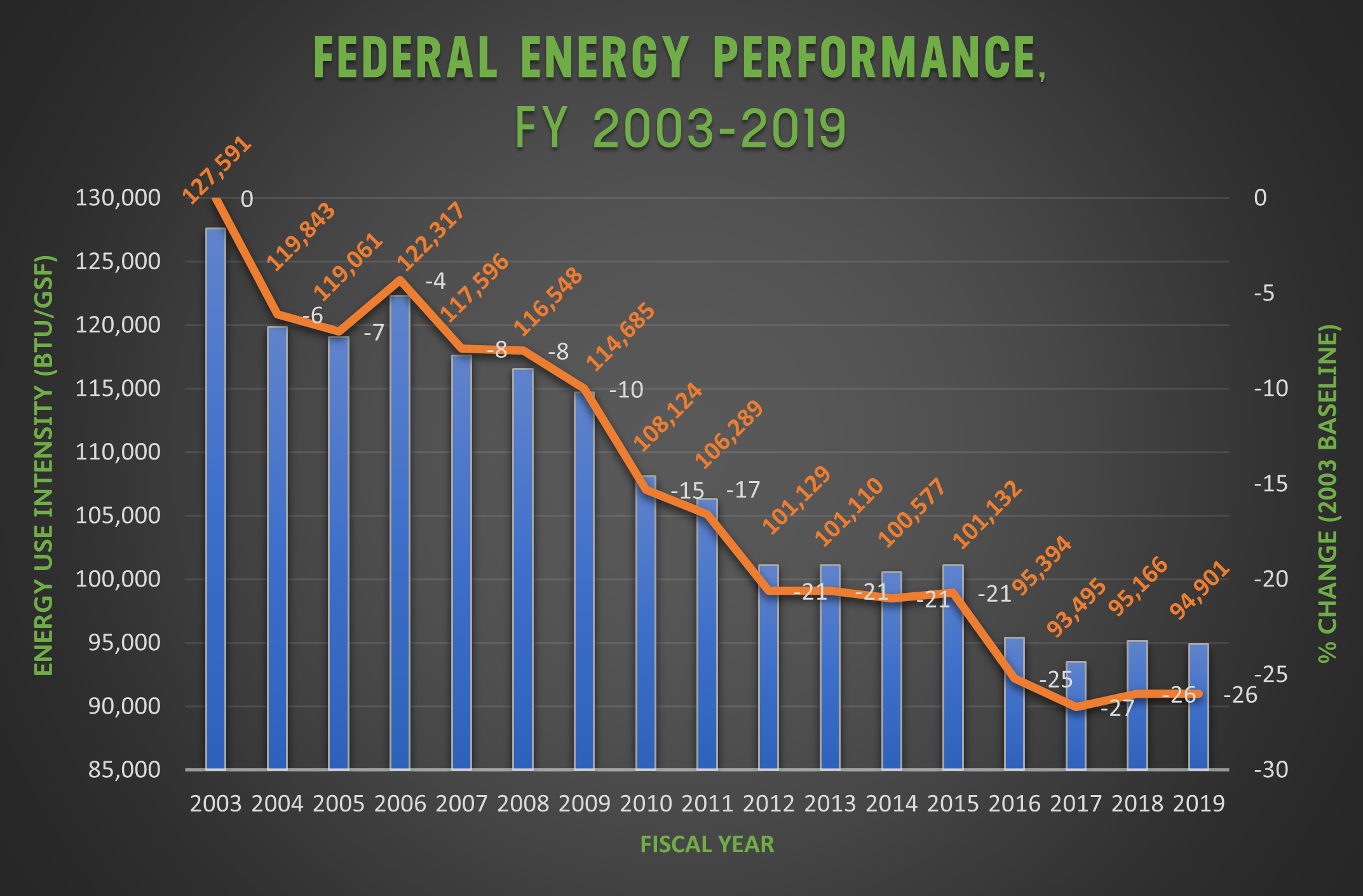 While this may seem like the governance equivalent of being told to turn out the lights when you’re no longer going to be in the room, it packs a powerful punch because agencies get their ambition from the top. Unclear, unattainable, or unaspiring goals will have unsatisfactory results.

Congress first established energy conservation requirements for federal buildings more than four decades ago. On Oct. 9, 1978, the Senate voted 86-3 to pass the National Energy Conservation and Policy Act (NECPA) of 1978, directing agencies including the Department of Energy (DOE) and General Services Administration (GSA) to set and attain energy performance targets for federal buildings. President-elect Biden, then a freshman Senator, along with sitting Senator Patrick Leahy of Vermont, were among those who cast votes in support, ushering in a new era of demand-side energy policy, sparked by the energy crises of the 1970s.

These days, the U.S. faces different crises that implore the same urgency of action. While Congress should pass bipartisan legislation requiring federal energy targets, the urgency requires near-term actions that simply can’t wait for the legislative logjam to break.

Congress, including Sen. Biden, upped the ante in the comprehensive energy packages passed under the George W. Bush administration in 2005 and 2007, first establishing and later enhancing statutory federal energy targets for federal buildings. Those energy use intensity (EUI) targets, requiring a 30% reduction in EUI from a 2003 baseline, expired in 2015, but President Barack Obama extended and reworked the targets in Executive Order 13693. E.O. 13693 was later revoked by Trump’s E.O. 13834 (May 2018), which had no hard targets for agencies beyond year over year improvement.

The Energy Independence and Security Act (EISA) of 2007 also required agencies to benchmark building energy and water performance of “goal-subject” facilities. Looking at recent results recorded in agency sustainability scorecards reveals that the federal government has left a lot of energy and emissions savings on the table at the expense of taxpayers. The Federal Energy Management Program (FEMP) has identified energy and water conservation measures that, if implemented, would save nearly $800 million in annual energy and water costs. That represents 15% of the cost to taxpayers to power federal public buildings ($5.4 billion in 2016). 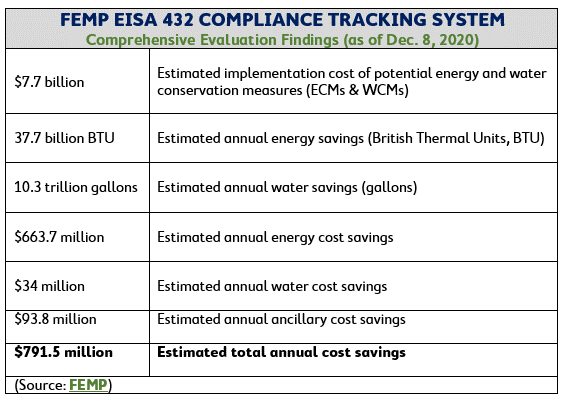 Established by executive action in 1975, FEMP has made significant strides in energy efficiency. FEMP leadership has cut the energy intensity of the federal government in half and saved taxpayers more than $50 billion. And that’s great. Still, as we’ve seen, so much more can be done.

In addition to product procurement, FEMP provides agencies with centralized expertise in energy management; it also serves as a coordinator for performance-based contracting such as Energy Savings Performance Contracts (ESPCs) and Utility Energy Service Contracts (UESCs). Performance contracts are innovative mechanisms that use private sector funds to cover costs of energy upgrades, with no upfront appropriations required of Congress. These contracts guarantee energy savings to the government, putting the risk on the private partner, and in return, private energy service companies (ESCOs) or utilities receive a share of those savings until the end of the contract.

Under Obama, the U.S. set and achieved multiple federal goals for performance contracts that will result in a final estimated savings of $8 billion in energy expenses by 2035. Setting goals for agencies to enter into these contracts and implement all identified cost-effective efficiency measures would go a long way toward reducing the energy consumption and greenhouse gas emissions of federal buildings.

Through setting meaningful goals, coordinating planning across agencies, and increasing participation in performance-based contracts, President-elect Biden could re-establish federal leadership in energy efficiency, reducing the burden on all U.S. taxpayers while helping the global climate.