Congress Came Together to Improve Wasteful Light Bulbs. Is the Trump Administration About to Undo the Big Consumer Savings? | Alliance to Save Energy
Skip to main content

Congress Came Together to Improve Wasteful Light Bulbs. Is the Trump Administration About to Undo the Big Consumer Savings?

Congress Came Together to Improve Wasteful Light Bulbs. Is the Trump Administration About to Undo the Big Consumer Savings? 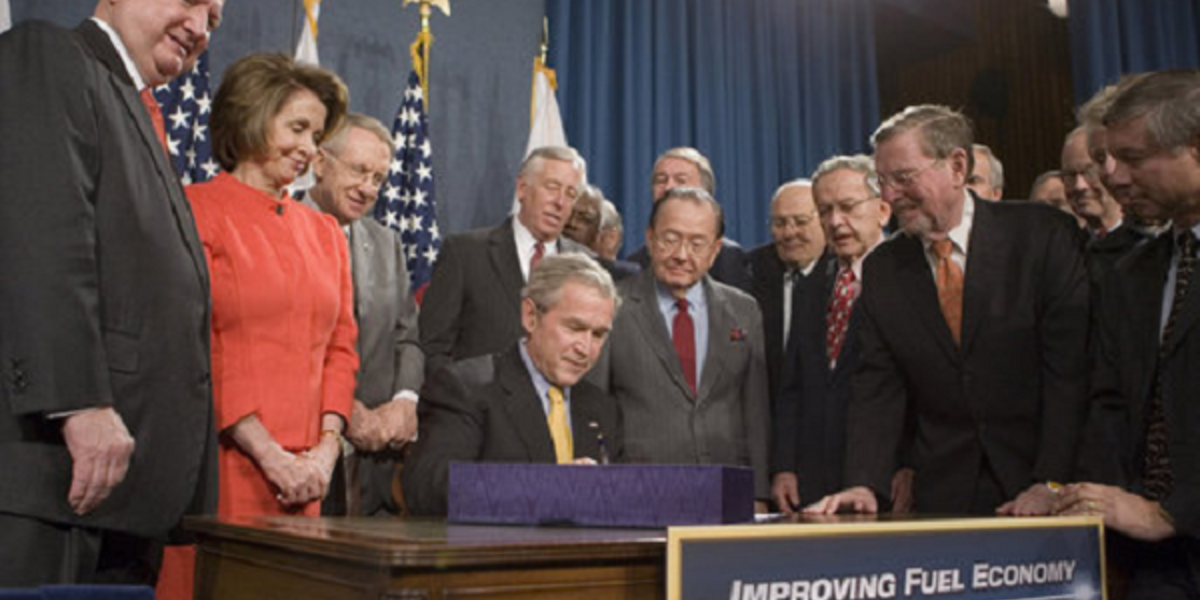 In 2007, Congress came together and passed bipartisan legislation that advanced energy efficiency and addressed a problem facing American families. If you remember back then, most light bulbs used in homes were much less efficient than what we have today. Wasted energy to light our homes and businesses came at a high cost – hundreds of dollars for the average household. Democrats and Republicans joined forces and crafted a practical policy solution setting us on a gradual path to savings from far more efficient light bulbs. The plan was included in the Energy Independence and Security Act of 2007, passed overwhelming by both chambers of Congress and signed by President George W. Bush.

Eleven years later, thanks in no small part to that legislation, the price of lighting our homes has indeed plummeted, with even more room to fall as American have embraced high-efficiency light bulbs. Yet at this very moment, the Trump administration is preparing to issue a new proposal that would flip the switch to that progress right off.

Why is the administration doing this? And why now, years after Congress took action and we have all grown used to very energy-efficient light bulbs? To understand, it helps to take the way-back machine and return to 2007.

When Congress wrote the 2007 energy bill, the high-profile debates were on issues like renewable energy mandates and tax breaks for oil companies. Efficiency standards for light bulbs were far less controversial, but also a big priority of Congressional leaders.

In the House, Rep. Fred Upton, a Michigan Republican and Rep. Jane Harman, a California Democrat, were charged by their leadership to work out bipartisan light bulb provisions. You don’t have to take it from me. Let’s go to the transcript.

“We worked very closely with all parties, particularly with the industry, and environmental crowd, as well,” Upton said. “This is more than just one light bulb at a time, it is in fact, a shining amendment in terms of what we can do together, House and Senate, Republicans and Democrats, environmentalists and industry, to make sure that, we’re getting the biggest bang for our buck.”

Harman quipped that she and Upton had “lived and breathed lighting issues” as they worked toward a solution, so much that “our spouses complain that we’ve started to glow in the dark.” In an earlier meeting, Rep. Joe Barton of Texas – the top Republican on the Energy and Commerce Committee – complimented the “constructive dialogue and bipartisanship” to reach “an acceptable compromise.”

The light bulb provisions required the Department of Energy to develop two phases of standards for light bulbs. These technology-neutral standards would require that new bulbs produce a certain amount of light for each unit of energy used. When Congress passed the popular bill in December (by margins of 86-8 in the Senate and 314-100 in the House) the U.S. had a new light bulb policy worthy of the 21st Century.

President George W. Bush agreed. When he signed the bill he specifically noted the light bulb section. “The legislation I'm about to sign should say to the American people that we can find common ground on critical issues,” he said.

The Alliance – which worked closely on a bipartisan basis with members of Congress and industry stakeholders to develop the light bulb provisions – hailed the bill as the “most significant energy-efficiency legislation in three decades.”

Since then...well, again you don’t have to take my word for how all this has worked out. Just walk in a hardware store and bask in the choices of energy-efficient options to light your lamps. And not just energy efficiency has improved. Over the past 11 years, innovation on the part of leading light bulb manufacturers has been off the charts. Light bulbs are now key elements of the latest “smart home” platforms, giving homeowners and consumers seamless integration of devices and more options that were the stuff energy efficiency dreams were made of in 2007.

The first phase of standards – covering the most common types of household light bulbs – started taking effect in 2012. Americans are realizing big savings. By 2025, the average U.S. household will be saving $67 each year because of these standards, according to new calculations by ASAP and ACEEE. The second phase of standards cover a wider range of light bulb types and are set to take effect in 2020. After these newer standards, annual average household savings will increase by an additional $116.

Despite all this – the bipartisanship, the choice and innovation, the savings – the Trump administration quietly pledged in a legal settlement to revise the second phase standards and prevent the 2020 energy efficiency levels from taking effect. Last month, DOE sent a draft of a revised second-phase standard to the White House for review. When that review is completed, DOE will issue the new proposal.

These developments are unfortunate and put tremendous savings – not to mention emissions reductions and other environmental benefits – at risk. While there is some uncertainty around what the final proposal will say, the Alliance is very concerned. It may well try to undo what Congress accomplished in 2007. Maybe it will propose a delay, or permit more energy consumption, or limit the scope to cover fewer types of light bulbs.

We hope not. But if it does, the Alliance will do its part to convince DOE to do the right thing and stay true to a bipartisan deal that has proved tremendously effective policy.