H.R. 5802 – The United States Green Bank Act of 2016 and Issuance of Green Bonds | Alliance to Save Energy
Skip to main content 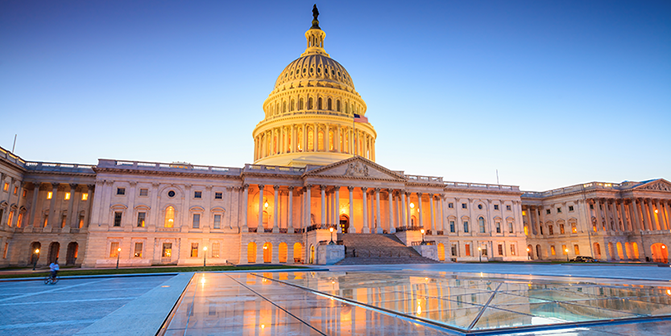 A green bank is a public finance entity that leverages a limited amount of public funding to finance private investment in clean energy and energy efficiency projects. This public-private partnership not only increases the pace and volume of investment in clean energy projects at the state and local levels, but also improves the standard of living for Americans by funding projects that create long-term jobs and by delivering clean electricity more efficiently at a lower cost. By mitigating risks, providing innovative transaction structures, and prioritizing cost-effectiveness and performance, [1] green banks mobilize capital that would otherwise remain trapped in tight balance sheets.

This provision would direct the Secretary of Treasury to issue bonds for $10 billion on the full faith and credit of the U.S. to acquire capital stock of the newly established United States Green Bank. After this initial capitalization, the Secretary would issue additional green bonds at the request of the Bank; however, any additional capital stock cannot exceed 50 billion dollars in aggregate sum at any point in time. The Secretary would determine the form, denomination, and maturity periods for the green bonds and interest on the bonds would follow the same interest rate patterns[2] that are typically followed by regular Treasury bonds.

By creating a United States Green Bank, the bill aims to facilitate efficient tax equity markets for clean energy projects, promote the financing of long-term clean energy purchasing by both government and non-profit actors, and foster the development and consistent application of transparent underwriting standards and measurement and verification processes for those projects. By creating performance data that enables effective underwriting and risk management, the Bank would also stimulate the development of secondary investment markets for clean energy projects. The bill also aims to leverage the increased pace of clean energy projects at the state and local levels to advance national objectives such as achieving energy independence, attaining low carbon electricity generation and transportation capabilities, and easing the economic effects of transitioning away from a carbon-based economy.

The bill outlines the necessary parameters of the national green bank and defines several key terms, such as what qualifies as a “clean energy project” or “energy efficiency project.” The definition of these terms is fairly broad and applies to projects dealing with generation, transmission, storage, smart grid and end-use technologies. However, two notable exclusions cover alternatively fueled vehicles and nuclear projects (except when all other funds for nuclear projects have been expended).

Establishment of Green Bank and Board of Directors

This provision creates a United States Green Bank chartered for 20 years under the direction of the Secretary of Treasury and explains how the Bank will be operated. The Bank would be run by a Board of Directors responsible for the proper management and function of the Bank. This Board would be comprised of seven members: The Secretary of Treasury, the Secretary of Energy, the Secretary of Transportation, and four other members appointed by the President of the U.S., one of whom will serve as the Board CEO. These appointees would include a renewable energy and/or energy efficiency expert, a finance expert, an electric utility expert, and a sustainable transportation expert. Each department Secretary can also opt to designate an appointee to the Board. After an initial 4-year term, the terms of Board members would become staggered.

The Act would create a revolving fund under the Treasury called the “Green Bank Establishment Fund,” which would receive proceeds from the Green Bonds issued under the bill as well as any additional authorized appropriations used to supplement the Fund. A competitive program established under the Green Bank would provide loans, loan guarantees, or credit buy downs to Financing Institutions via the Fund. This process would provide capitalization for Financing Institutions rather than directly lending to any individual projects. In order to access capitalization and co-funding, the Eligible Clean Energy Financing Institutions would need to cover at least 1 million dollars or 20 percent of the total initial funding provided by the Bank. After initial funding, the Institutions cannot receive additional funding in amounts that exceed twice the amount of initial capital offered. The Bank would regulate all activities and operations that fall under this interaction between the Fund and Financing Institutions. Although all financial support offered through the Green Bonds would be fully and unconditionally guaranteed by the U.S., any other support provided by the Bank would not be guaranteed.

Although the Bank is authorized to collected reasonable fees on its activities to cover costs and expenses, it would operate as a not-for-profit entity. The Chief Executive Officer of the Board of Directors would oversee the distribution of all amounts in the fund until they are expended. The Bank would remain immune from impairment, limitation, or restriction by any state laws relating to incorporation as well as federal laws that become effective after the Bank acquires related property. The Bank’s activities, capital, reserves, surplus, and income would be exempt from state taxes; however, any of its real property remains subject to state taxation. Any legal proceeding to which the Bank is a party would have original jurisdiction, with the Bank’s reserved right to remove any action or suit from a state court to a U.S. district court.

All participating Financing Institutions would be required to submit quarterly reports to the Bank CEO, including updates on its use of funds and progress toward fulfilling its clean energy objectives. These reports would all be public information and the CEO could request additional reporting and information from any Financing Institution. If an Institution demonstrates poor performance or wasteful spending as defined in advance by the CEO, the CEO has the right to withdraw and reallocate financing support to another Financing Institution. Additionally, the bill mandates a database available to the public with current information on the application processes, activities, and financial transactions of the Finance Institutions and participating projects. This data could be used to inform private capital markets and assist in the development of underwriting standards to better finance clean energy and energy efficiency projects.

This provision defines the allowable amount of foreign-related interest expense that would qualify as a deduction for any taxable year and details methods for determining the current inclusion ratio for deferred deductions therein. The Secretary could determine regulations or offer guidance to allow for the proper application of the subsection concerning ownership of a section 902 corporation and other applications regarding a section 902 corporation’s assets.

[2] Defined specifically as a rate not less than the current average yield on outstanding market obligations of the U.S. of comparable maturity during the month preceding the issuance of the obligation as determined by the Secretary