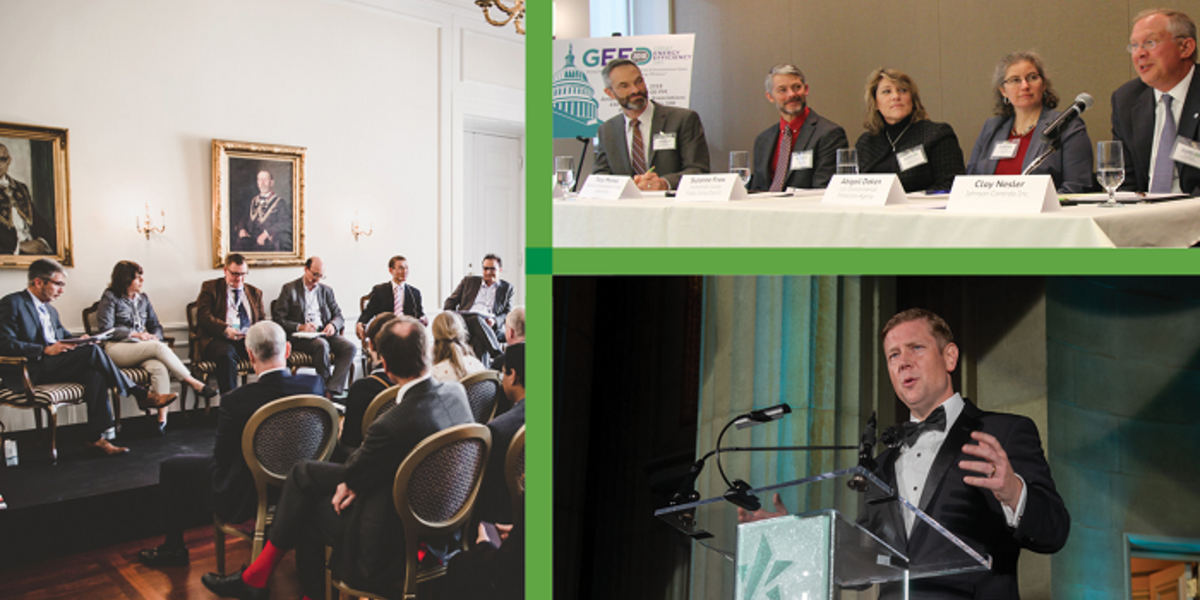 As we reach the end of the year and start thinking about our New Year’s resolutions, let’s take this opportunity to reminisce about the Alliance’s best energy efficiency moments of the year.

Best event: Where is there not only great company, great cuisine, but a celebration of the years’ best energy efficiency innovators? That would be our black-tie Evening with the Stars of Energy Efficiency Awards Gala. (Sub-award for funniest speech to Sen. Amy Klobuchar!)

Best event, European edition: We took this year’s EE Global Forum to a marvelous, energy-efficient city: Copenhagen. The event brought together energy efficiency leaders and experts from more than 50 countries for two days of partnership building, strategizing, and learning.

Best report: Our 50x50 Commission spent a year preparing consensus recommendations for reducing energy use in U.S. transportation – so it was pretty exciting when we released 50x50: Reinventing U.S. Mobility to a packed room on Capitol Hill in September and earned a flood of media coverage.

Best hire: Early this year, we searched for a new president to replace longtime Alliance head Kateri Callahan, looking for a proven leader with deep experience in our field. We found Jason Hartke at the DOE and knew he was the one. (He was promptly named a “Top Lobbyist” by The Hill just six months later).

Best statistic: Energy efficiency could provide more than 40% of the emissions reductions needed to meet the goals of the Paris Agreement. That’s from the International Energy Agency’s Efficiency 2018 report. We’re sure you’ll be hearing us repeat it now and then.

Best quote: At EE Global, Dr. Bertrand Piccard said the world’s approach to energy is like continuing to fill a leaking bathtub instead of fixing the leak. “We always want to produce energy when instead the goal should be to consume less.” Agreed!

Best trip: It’s hard to beat taking a delegation of congressional staff to tour companies and research facilities at the cutting edge of efficiency technology, and having the mayor graciously host your big meeting. Thank you, Pittsburgh and Mayor Bill Peduto.

Best day: Energy Efficiency Day, obviously. The 2018 edition of this celebration and awareness day in October reached more than 12 million people on social media – and the U.S. Senate even passed a resolution in support.

Best economic news: The U.S. Energy and Employment Report had some eye-popping numbers: energy efficiency is one of the largest employers in the entire energy sector, supporting 2.25 million jobs. And there were 67,000 new efficiency jobs in 2017 alone – half of all the new jobs in energy. Now that’s something to celebrate.

Best policy victory: In September, Congress passed, and the president signed, a bill increasing funding for the DOE’s energy efficiency programs. That came after the administration initially called for effectively killing most of them. We couldn’t be prouder of the work our entire network did to show the importance of smart energy efficiency investments.