For more than 35 years, the Alliance to Save Energy has capably served as a bipartisan, nonprofit coalition of business, government, environmental, and consumer leaders committed to promoting energy efficiency worldwide to achieve a healthier economy, a cleaner environment, and greater energy security.  Founded in 1977 by Senators Charles Percy, a Republican from Illinois, and Hubert Humphrey, a Democrat from Minnesota, the Alliance has worked tirelessly to improve the efficiency of America’s energy resources and to make certain that energy is not wasted.

Rationale for Federal Energy-Efficiency Programs:  Wasted energy is a costly drag on the U.S. economy, but equally important amid the ongoing economic recovery is that investing in energy efficiency – the quickest, cheapest and cleanest way to address our nation’s growing demand for energy – contributes more toward meeting this need than any other resource.

The Alliance fully recognizes the significant challenges facing the federal government to reduce spending and spur economic growth.  However, the organization believes strongly that failing to properly fund energy efficiency and research and development programs at the Department of Energy’s (DOE) Office of Energy Efficiency and Renewable Energy (EERE) at robust levels would undermine our national economic, environmental and security interests.  These programs have resulted in exceptional value for American consumers and businesses as a source of savings that are spent in other economic sectors, yielding benefits far beyond their nominal outlays.

Over the last 40 years, the United States has made significant gains in energy productivity, which is the ratio of output divided by energy consumption and is a useful indicator for understanding the efficiency of an economy.  According to a study conducted by McKinsey & Company, the country – with government assistance – could cost-effectively reduce energy consumption by 23% from the business as usual case by 2020 through an array of energy efficiency measures, saving about 9.1 quadrillion in British thermal units (BTUs) in end use energy and yielding approximately 1.2 trillion in gross energy savings.

If not for U.S. energy productivity gains since the early 1970s, our nation would have needed to consume about 50% more energy – with concomitant impacts on energy bills, oil imports, energy reliability and security, and environmental quality – to deliver today’s gross domestic product (GDP).  The following Alliance to Save Energy figure graphically illustrates the point. 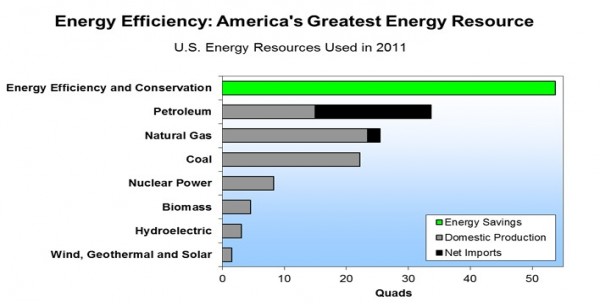 A record of success:  Energy efficiency and research and development programs at the Department of Energy’s (DOE) Office of Energy Efficiency and Renewable Energy (EERE) programs have served as a central pillar of sound U.S. energy policy.  The savings achieved through the research and development of new energy-efficiency technologies through EERE programs help these technologies achieve widespread use and justify continued investment in them.  McKinsey & Company estimated that $354 billion in building energy efficiency investments during 2009-2020 could yield $685 billion in savings.  For manufacturing, the National Research Council cited approximated potential savings of 14 to 22% of total industrial sector energy use in 2020.  The savings were based on cost-effective technologies that yield at least a 10% internal rate of return.

At a time when too many Americans are suffering financial hardships, EERE programmatic investments offer real solutions that would not only help alleviate their economic pain, but would also deal with the short- and long-term problems associated with rising energy use.

Moreover, the President’s call for a doubling of the nation's energy productivity by 2030, consistent with the Alliance Commission on National Energy Efficiency Policy’s Energy 2030 report, is clear acknowledgment of the power of energy productivity and its ability to address economic, environmental, and national security concerns.  The addition of $200 million for an energy productivity “Race to the Top” – also in the Energy 2030 recommendations – reaffirms the integral role that state energy efficiency policies play in our national energy system and thus in reaching our economic, environmental, and security goals.  The Alliance looks forward to engaging the Administration and the Committee in a bipartisan manner to help design the Race to the Top, implement effective research and development investments, reform efficiency tax incentives, and address other areas in the budget.

Several recent analyses show that hundreds of billions of dollars of investment are needed to reduce the energy waste in our country and its hindrance on consumer pocketbooks, economic productivity, the environment, and national security.  An analysis by the Rhodium Group for the Alliance’s Commission finds that doubling energy productivity would require investment of $166 billion each year through 2030, but would avoid $327 billion a year above those costs, save the average household $1000 a year, add over a million jobs, and reduce both carbon dioxide emissions and oil imports by a third.

While the United States has made significant energy productivity progress over the last several decades, the nation cannot afford to withhold support for federal investments in energy efficiency.  Heightened international economic competition; stresses on American energy, transportation, and other physical infrastructure; continued economic and geopolitical vulnerabilities to energy price shocks (despite increased North American oil and natural gas production); and multiple environmental challenges associated with energy all indicate a necessity to strengthen U.S. efforts to enhance energy productivity.  To that end, the President’s FY 2014 budget for the U.S. Department of Energy recognizes that investments in energy efficiency are needed to address high energy costs, improve our national energy security and reduce the harmful environmental impacts associated with the production and use of energy.