Link Between Economic Growth And Increased Energy Use Has Been Severed | Alliance to Save Energy
Skip to main content
01/29/14 : Bill Fay

Link Between Economic Growth And Increased Energy Use Has Been Severed 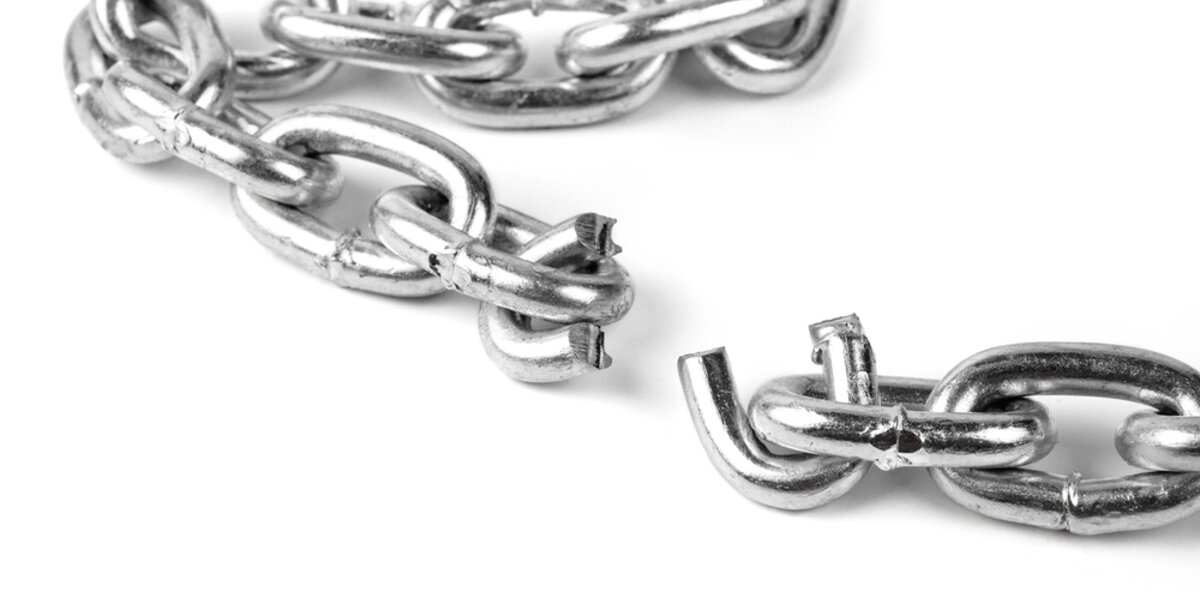 Isn’t it comforting when you see independent, unbiased confirmation that all of your hard work is paying off? 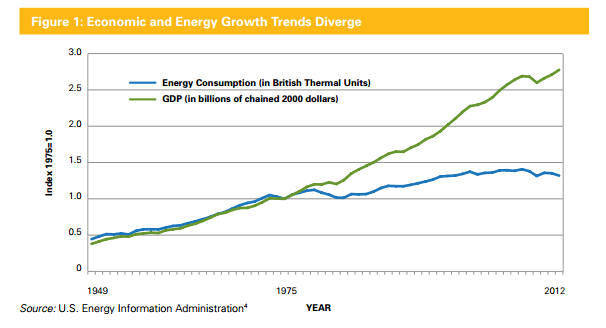 What a difference three triennial building energy code cycles can make! It took just two IECC code cycles to meet our goal of a 30% boost in efficiency for new home and commercial building construction. And when the dust settled on the third code cycle, which developed the 2015 IECC, we had escaped a nationwide campaign to roll back the gains we had won in the 2012 IECC.

More precisely, the US Department of Energy deemed the 2012 IECC’s 32.1% efficiency gains “the largest, one-step efficiency increase in the history of the national model energy code.” The DOE even developed a chart that put it all in perspective (Note: we added the EECC starting date): 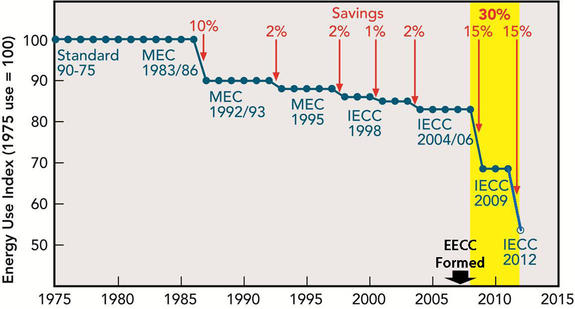 But does a 30% boost in a “model” energy code really make a difference? Critical analyses and data suggest it does.

“Improvements in energy efficiency for buildings and appliances appear to have broken the traditional connection between electricity demand and economic growth.”

This conclusion was also documented in “America’s (Amazingly) Good Energy News,” an October 2013 report by the Natural Resources Defense Council which concluded that the “state of the U.S. energy economy has never been better,” citing government data “shows much of the credit can be given to a huge and inexpensive energy resource that deserves far more attention: energy efficiency.”

No New Power Plants Until After 2025?

Ms. Good’s comments aren’t the first time utilities have documented the demise of the age-old assumption that a growing economy needs more energy. A May 2011 White Paper by the Institute for Electric Efficiency (the research arm of investor-owned utilities) found that continued savings of the magnitude of recent efficiency gains in building energy codes (notably from the 2009 and 2012 IECCs) and appliance standards

“will completely offset the anticipated growth in demand in the residential, commercial, and industrial sectors combined, eliminating the need for additional power plants to serve these sectors through 2025.”

The Beneficiaries Are Myriad

There’s obviously a lot more to do. A model building energy code must be universally adopted, followed by builders, and enforced.

Still, the prospects of a nationwide economic recovery without greater energy use is the very epitome of the “doing more with less” definition of efficiency, particularly when it involves the “elephant in the room””— the homes and commercial buildings that consume 42% of our nation’s energy, 54% of its natural gas, and 71% of its electricity and also account for 39% of its greenhouse gases.

At the macro end, the benefits for significantly advancing building energy efficiency are greater national energy security, enhanced competitiveness, and reduced greenhouse gas emissions. At the micro end are America’s home and commercial building owners and occupants, who not only pocket thousands of dollars in net energy savings, but who also enjoy greater comfort, peace and quiet, and higher resale values. In between are communities that don’t have to build costly new power plants, more stable energy prices to Main Street businesses, and power grids that can service more customers because peak load demands are lessened by better performing buildings.

It is comforting, isn’t it?