The Alliance to Save Energy News 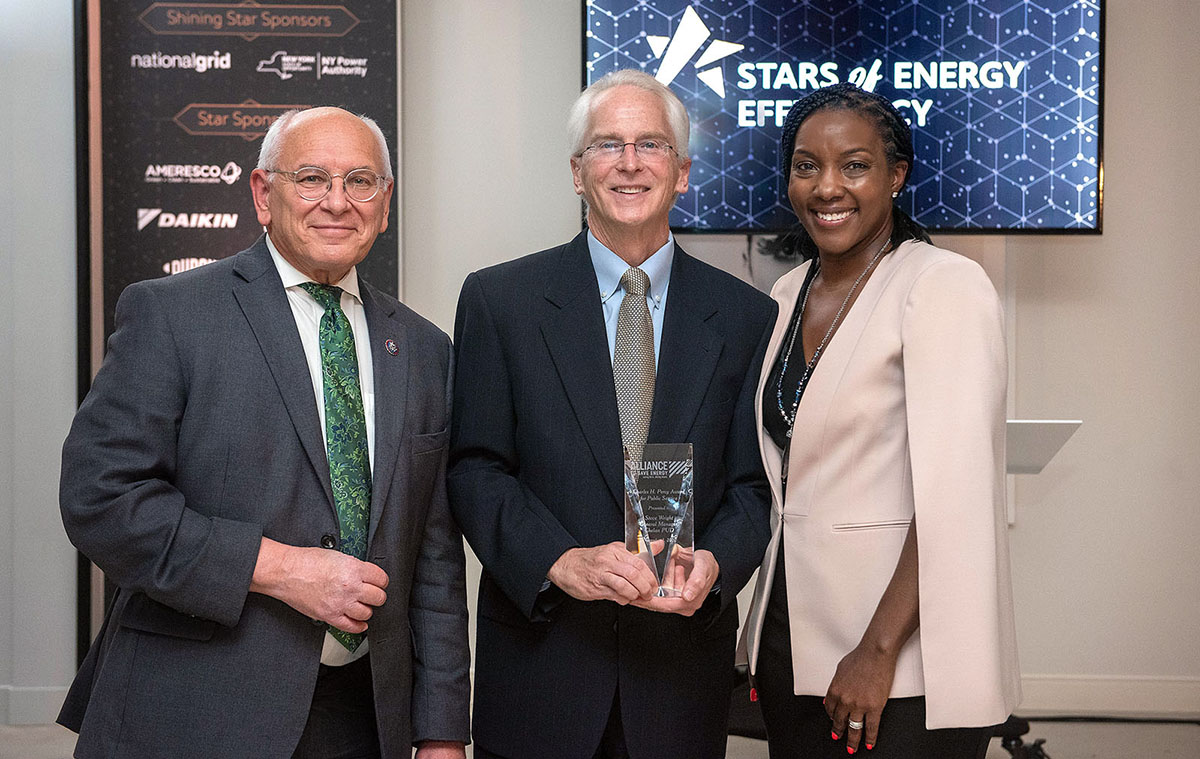 WASHINGTON –The Alliance to Save Energy proudly presented the 2021 Charles H. Percy Award for Public Service to General Manager Steve Wright of Chelan County PUD on Wednesday, Nov. 3. Since 1995, the Percy Award has been among the sector’s highest honors, celebrating outstanding public service in energy efficiency.

While presenting the award at the Stars of Energy Efficiency Awards Reception in Washington, D.C., Alliance President Paula Glover said:

“It takes someone of true commitment and clear-eyed purpose to work in the public service for their entire career, and it’s unusual to find people who have that level of dedication, who are willing to put in the hours for year after year, often even without a thank you. So I couldn’t be prouder to give a well-deserved and long-overdue ‘thank you’ to Steve.”

In accepting the award, Wright remarked:

“The Alliance to Save Energy represents two beliefs that I hold dear. First, the value of energy efficiency to bridge and connect economic and environmental health for our country. Second, to do the hard work of building bipartisan coalitions. I am deeply honored to receive this award because it celebrates both these missions. Thank you to the Alliance employees who are inspiring with their dedication. Thank you to my many friends and colleagues I have worked with over the last 40 years who share in this award and who deserve the recognition more than me.”

Wright entered his career in energy efficiency in 1981 with the Bonneville Power Administration, where he would dedicate more than three decades, including the last 12 years as Administrator/CEO of the federal agency. Under his watch, the Pacific Northwest entered what the Northwest Power and Conservation Council deemed the longest sustained period of regional utility energy efficiency acquisitions in history. In 2013, he was named General Manager of Chelan PUD, where his dedication to cost-effective and customer-friendly efficiency solutions continued. In 2017, he was appointed to the Alliance’s Board of Directors. Wright’s tenure with Chelan PUD comes to an end in December.

About the Alliance to Save Energy

Founded in 1977, the Alliance to Save Energy is a nonprofit, bipartisan alliance of business, government, environmental and consumer leaders working to expand the economy while using less energy. Our mission is to promote energy productivity worldwide – including through energy efficiency – to achieve a stronger economy, a cleaner environment and greater energy security, affordability, and reliability.