Pennsylvania’s North Penn School District will receive a 2013 ENERGY STAR Partner of the Year award from the Environmental Protection Agency (EPA) on March 26 in Washington, D.C.  The prestigious award will recognize the district’s energy efficiency efforts.

The Alliance to Save Energy’s PowerSave Schools program helped educate the district’s students on how to cut energy waste with impressive results, which was funded by retail energy supplier Direct Energy.

“Over the past year we were able to save more than $1.1 million in utility costs, an amount equal to the combined salaries of 21 first-year teachers. This was achieved through operational and behavioral changes and with no capital expenditure,” said North Penn District Energy Manager Tom Schneider. 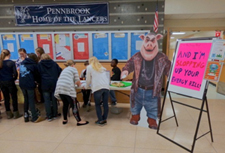 Some of the award-winning results include:

“During his State of the Union speech President Obama embraced a goal of cutting U.S. energy waste in half and these students are already making a dent in their own community,” said Alliance Vice President of Education Merrilee Harrigan.

“We have been blown away by what the North Penn students have been able to achieve,” said Vice President for Direct Energy Mike Senff. “They are proof that when you empower students to make positive change, they step up to the challenge.”