“They said it couldn’t be done in an election year, much less during a lame duck session of Congress – but the Alliance and its allies on and off the Hill have once again demonstrated the power of energy efficiency to find support on both sides of the aisle. And thanks to the commitment and perseverance of the sponsors for more than a year, new energy efficiency provisions that will benefit industry and the federal government are now the law of the land!” declared Alliance President Kateri Callahan.

“With President Obama’s signature on the bipartisan American Energy Manufacturing Technical Corrections Act (H.R. 6582),” Callahan continued, “the stage is set for advancing additional energy efficiency efforts, and the Alliance is poised, once again, to take a leading role. Early next year the Alliance Commission on National Energy Efficiency Policy will release recommendations to double U.S. energy productivity by 2030.”

“We commend and congratulate not only Sens. Shaheen, Portman, Bingaman, and Murkowski on enactment of this new energy efficiency law,” Callahan said, “but also Rep. Robert Aderholt (R-Ala.), who sponsored the law’s House version, and Reps. Fred Upton (R-Mich.), Ed Whitfield (R-Ky.) and Henry Waxman (D-Calif.), whose efforts brought the bill to the House floor earlier this month for an overwhelming 398-2 vote.” 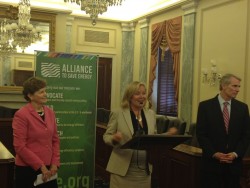 The Long and Winding Road

The Alliance joined Sens. Shaheen and Portman when they introduced S. 1000 in May 2011 at a Capitol Hill news conference. This past June, the Alliance and several industry and efficiency advocates kept the momentum going at a second Capitol Hill event. A bipartisan majority of the Senate Energy and Natural Resources Committee approved the bill, but it did not come up for a vote on the Senate floor.

Members of the House Energy and Commerce and Senate Energy Committees subsequently developed H.R. 6582, which included some provisions of H.R. 4850. House and Senate passage of that bill followed, culminating in today’s enactment by the president.

The new law includes these elements from the Shaheen-Portman bill:

It also includes these S.398 and H.R. 4850 provisions that build on the Department of Energy’s (DOE) successful 25-year-old appliance efficiency program:

“We eagerly anticipate working with the new Congress and will encourage its adoption of the remaining provisions of S. 1000,” Callahan concluded. “We are gratified that energy efficiency has once again proved to be a policy for all seasons and all political persuasions.”