Susan Collins | Alliance to Save Energy
Skip to main content 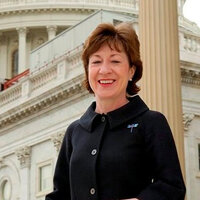 Honorary Board Member since 2001

Maine voters first elected Susan M. Collins to represent them in the United States Senate in 1996. She was reelected in 2002 and 2008. She has earned a national reputation as a thoughtful, effective legislator, who works across party lines to seek consensus on our nation’s most important issues. Senator Collins is the 15th woman in history to be elected to the Senate in her own right.

Committees
Senator Collins is Ranking Member and former Chairman of the Homeland Security and Governmental Affairs Committee, which has jurisdiction over the Department of Homeland Security and is the Senate’s chief oversight committee. She also serves on the Appropriations Committee, Armed Services Committee, and is a member of the Special Committee on Aging. Previously, she served for six years on the Committee on Health, Education, Labor, and Pensions. Senator Collins was also the first freshman Senator ever to lead the Permanent Subcommittee on Investigations.

• Reforming national intelligence: Senator Collins coauthored the Collins-Lieberman intelligence reform legislation, which was signed into law in December 2004. The law represents the most sweeping changes to our intelligence community in more than 50 years and implements many of the recommendations of the 9-11 Commission with a focus on improving our intelligence systems to help prevent future terrorist attacks.

• Improving disaster response: After observing the poor response at all levels of government, including the Federal Emergency Management Agency (FEMA), to the Hurricane Katrina disaster of 2005, Senators Collins led a thorough investigation of our national system for preparing for and responding to disasters. As a result, Senators Collins and Joseph Lieberman (ID-CT) coauthored legislation that reorganized FEMA within the Department of Homeland Security. Among other major reforms, the new law statute reunites FEMA’s preparedness and response capabilities to meet the challenges of all aspects of emergency management.

• Preventing attacks on chemical facilities: America’s thousands of facilities that manufacture, store, or use hazardous chemicals are economically vital, but could expose thousands or even millions of people to risk if attacked. The Chemical Facility Anti-Terrorism Act authored by Senators Collins and Lieberman directs DHS to require vulnerability assessments, establish security standards, and require plans and drills at high-risk chemical facilities.

NATIONAL DEFENSE
Senator Collins has promoted a strong national defense. She has consistently supported legislation to provide a continued and steady workload at Bath Iron Works, and restore the nation’s shrinking U.S. Navy fleet. As a member of the Senate Armed Services Committee, Senator Collins successfully advocated for dual-lead ship DDG-1000 acquisition strategy and has consistently opposed a “one-shipyard” proposal for construction of our next generation of surface combatants. She understands the importance of a strong industrial base to our national security.

EDUCATION
Senator Collins has been a tireless advocate for education. As one of the architects of landmark education reform legislation, she led the successful charge to triple funding for early reading initiatives. She also authored the law providing a $250 tax deduction for teachers who spend their own money on classroom supplies and recently successfully sought an extension of this law. Her goal of expanding access to higher education for all students led her to co-author the 1998 Higher Education Act and to support increases in Pell Grants and other student financial aid.

FISCAL ASSISTANCE AND JOBS
In 2003, Senator Collins worked to secure $20 billion, including $116 million for the State of Maine, to help states deal with the budget shortfalls that were plaguing every state. This funding helped states avert major cuts in Medicaid and other vital state programs. Senator Collins is a long-time supporter of measures to encourage and assist small businesses to grow and create more jobs. She has earned a 100 percent rating from the nation’s largest small business organization, National Federation of Independent Businesses (NFIB).

HEALTH CARE
A national leader in health care advocacy who has consistently supported programs to expand access to health care and improve health care, particularly for citizens living in rural areas, Senator Collins coauthored the Access to Affordable Health Care Act which takes significant strides toward the goal of universal health coverage by bringing millions more Americans into the insurance system. The bill also strengthens the health care safety net and addresses inequities in the Medicare system. In addition, Senator Collins led the fight to restore critical funding to Medicare for home health care so that elderly citizens and disabled can receive needed care in their own homes. Senator Collins also founded the Senate Diabetes Caucus, and led the effort to more than triple federal funding for diabetes research. As co-chair of the Congressional Task Force on Alzheimer's Disease, Senator Collins has worked to increase funding for Alzheimer’s research and to strengthen support for family caregivers.

Biography
Susan Margaret Collins was born in the small northern Maine city of Caribou on December 7, 1952. Her family runs a fifth-generation lumber business, founded by her ancestors in 1844, and operated today by two of her brothers. Each of Senator Collins’ parents has served as Mayor of Caribou, and her father served Maine as a State Senator. In 1975, she graduated with magna cum laude honors from St. Lawrence University in Canton, New York, where she was also elected to the Phi Beta Kappa national academic society. After working for 12 years on the Capitol Hill staff of Maine Senator William Cohen, she joined the cabinet of Maine Governor John McKernan in 1987 as Commissioner of Professional and Financial Regulation. After five years in that post, she then served as New England Administrator of the U.S. Small Business Administration from 1992 to 1993. In 1994, Senator Collins ran her first campaign for public office. She emerged from an eight-way Republican primary in June 1994 as the first woman in Maine history to win a major-party nomination for governor. She lost that fall’s general election, but remained committed to public service. In December 1994, Senator Collins became the founding executive director of the Center for Family Business at Husson College in Bangor, Maine. She resigned in 1996 to run for the Senate seat being vacated by Senator Cohen. She went on to win both a contested Republican primary and a four-way general election later that year. In 2002, Senator Collins was reelected with 59 percent of the general-election vote. In 2008, Senator Collins was relected with 61 percent of the vote.

Honors
Senator Collins’s dedication and hard work have won praise from her home state newspapers as well as national newspapers from coast to coast.
• Upon the conclusion of the 109th Congress, the Portland Press Herald wrote about Senator Collins’ accomplishments, “…Collins gets it done. [Senator Collins’] moderation and bipartisan style should keep her winning streak alive.”
• Following passage of the Collins-Lieberman intelligence reform legislation, the Bangor Daily News wrote, “Senator Collins was tireless in crafting the largest change to the nation's intelligence agencies in a half century. She has served Maine and the nation well in her efforts, and deserves enormous credit for her thoughtful, forceful pursuit of this reform.”
• The Lewiston Sun Journal wrote, “Her reputation as a moderate and her willingness to work with politicians regardless of their political affiliations make her an effective voice in Washington.”
• The Maine Sunday Telegram said, “The Maine senator’s ability to stay focused on a goal is one of the reasons she’s gained a powerful post.”
• The Los Angeles Times referred to her as a “champion of good government” in a profile, while The New York Times has said, “Ms. Collins has a long history of taking on the Washington bureaucracy.”
• O Magazine named Senator Collins one of six women who could run for President saying, “she’s straight talking, very knowledgeable, and has a solid track record.”