Chris Coons | Alliance to Save Energy
Skip to main content 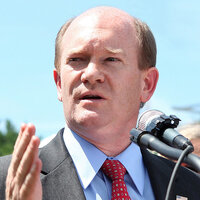 Honorary Board Member since 2012

In his first year as a United States Senator, Chris Coons worked hard and has earned a reputation as a principled, pragmatic legislator eager to find bipartisan solutions to the issues confronting Delaware and the nation. He has emerged as a strong voice for job creation and the innovation economy, responsible deficit reduction, progressive social justice, and forward-looking foreign policy.

Unwilling to be sidelined by partisan gridlock, Senator Coons has worked creatively to make a difference. Though legislation to support job creation continues to be obstructed in Congress, Senator Coons organized job fairs around the state to help Delawareans find work. Though funding for new police officers has been stalled by the economic downturn, Senator Coons founded the first-ever Senate Law Enforcement Caucus to help strengthen local, state, and federal public safety efforts. Though legislation in support of equality indifferent to sexual orientation or gender identity is moving slowly, Senator Coons recruited 12 of his colleagues for a stirring video that urged LGBT youth to remember ‘it gets better.’

Serving on the Foreign Relations, Judiciary, Energy & Natural Resources, and Budget committees, Senator Coons is uniquely positioned to nurture American innovation and make the United States more competitive in the global market. He is the only freshman to serve as a subcommittee chair, leading the Foreign Relations Subcommittee on African Affairs and emerging as an important voice on the security challenges and economic opportunities offered by the continent.

Committed to fulfilling the economic potential of American innovation, Senator Coons has introduced legislation and worked aggressively for a series of measures designed to help create jobs and grow our economy, including a comprehensive overhaul of the nation’s patent system, new protections for American intellectual property, and critical investments in research and development. His first bill in the Senate, the Job Creation Through Innovation Act, would help revitalize domestic manufacturing and create conditions to help businesses grow and create middle-class jobs. Chris later teamed up with Republican Senator Marco Rubio of Florida to introduce the American Growth, Recovery, Empowerment and Entrepreneurship Act, a bill containing an array of job-creating measures supported by both parties.

Chris’ election to the Senate in 2010 capped a decade of successful service in New Castle County government. In four years as New Castle County Council President and six years as New Castle County Executive, Chris earned a reputation for delivering real results on behalf of Delawareans and protecting the county during the least stable national economic climate in decades. Chris balanced six budgets by eliminating wasteful spending and created jobs through innovative public/private partnerships. His Safe Streets partnership removed dangerous parole violators from our neighborhoods and cleaned up dozens of the worst county properties. He also preserved hundreds of acres of open space and fought for an independent ethics commission to make county government more transparent in its business dealings.

Chris has devoted much of his free time to organizations such as the National Coalition for the Homeless and the education-oriented “I Have a Dream” Foundation.

Prior to serving as County Executive, Chris worked as an attorney for Delaware-based W.L. Gore & Associates, one of the 200 largest privately held companies in the United States, where he helped the company expand and create hundreds of jobs. Chris is a graduate of Amherst College with a B.A. in Chemistry and Political Science, and earned his law degree from Yale Law School and a Master's in Ethics from Yale Divinity School. Chris also studied at the University of Nairobi in Kenya.

A longtime New Castle County resident, Chris grew up in the Pike Creek and Hockessin areas and lives in Wilmington with his wife, Annie, and their three children, Michael, Jack, and Maggie.