Mark Warner | Alliance to Save Energy
Skip to main content 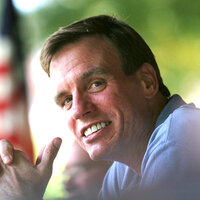 Honorary Board Member since 2010

Mark Warner was elected to the U.S. Senate in November 2008, and serves on the Senate's Banking, Budget, Commerce and Rules committees.

From 2002 to 2006, Senator Warner served as Governor of Virginia during its worst economic recession in 20 years. He worked in a bipartisan way to make state government more effective and affordable, and ultimately turned a record budget deficit into a surplus. He focused on improving public education and expanding economic opportunity, and brought 135,000 new jobs into Virginia during his four-year term. When Governor Warner left office in 2006, Virginia was recognized as the nation’s “best-managed state” and the “best state for business.”

Today, after just one year in Congress, Senator Warner is seen as a national leader in efforts to revive the economy by updating oversight of Wall Street, supporting our small businesses, and working in a bipartisan way to improve government performance and reduce the federal deficit.

Senator Warner was born in Indiana and raised in Connecticut. He was the first member of his family to graduate from college, earning an undergraduate degree from The George Washington University and a law degree from Harvard. He was an early leader in the cellular telephone industry, co-founding the company that eventually became Nextel and making early investments in hundreds of high-tech start-up companies that created thousands of jobs. As a philanthropist, Senator Warner has been a leader in his support of non-profit organizations that promote public schools and higher education, enhanced protection of our natural resources, and research into Alzheimer’s disease and juvenile diabetes.

Senator Warner, his wife Lisa, and their three daughters live in Alexandria, Virginia.