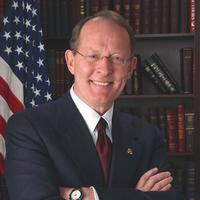 Honorary Board Member Since 2017

In 2016, the nation’s governors created the James Madison Award to recognize members of Congress who support federalism and the 10th Amendment of the U.S. Constitution guaranteeing states’ rights. The governors named Sen. Lamar Alexander as the first-ever recipient of the award for his work to fix No Child Left Behind. The new education law Alexander worked to pass was signed by the president in December 2015. The Wall Street Journal called it “the largest devolution of federal power to the states in a quarter century.”

In 2013, the National Conference of State Legislatures gave Sen. Alexander and three other senators its “Restoring the Balance” Award for protecting states’ rights, the first time in 10 years the organization gave this award to U.S. senators.

Alexander, a seventh-generation Tennessean born and raised in Maryville, was twice elected governor of Tennessee. He has always believed that in most cases the best decisions are made by those closest to the people.

Alexander is also chairman of the Senate Energy and Water Development Appropriations Subcommittee, where he works to boost funding for basic energy research and invest in our inland waterways and harbors.

Alexander was first elected to the Senate in 2002 and has been re-elected twice. His Republican colleagues elected him three times to be chairman of the Senate Republican Conference.

He has previously served as president of the University of Tennessee and as U.S. Secretary of Education under George H.W. Bush.

He is a classical and country pianist and the author of seven books.

Lamar Alexander and his wife Honey have four children and eight grandchildren and a dog named Rufus.