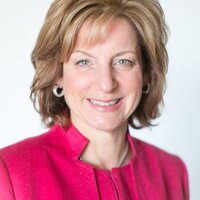 Board Director
Current, powered by GE

Board Member Since June 2017

Prior to her role at Current, Maryrose served as President & CEO of GE Lighting where she led more than 12,000 employees from one of GE’s most iconic businesses in an exciting global transformation as world markets shifted toward energy-efficient lighting solutions. Before joining Lighting, Sylvester was President & CEO of GE Intelligent Platforms—GE’s high-tech global provider of software, hardware, services and expertise in automation, operations management and embedded computing, serving the energy, water, oil and gas, manufacturing, government and telecommunications industries.

Sylvester began her GE career in 1987 as an intern at GE Motors in Ft. Wayne, Indiana. She then joined GE Lighting in 1988 in the Sourcing operation. Along the way, she held positions of increasing responsibility, such as Director of Sourcing for GE Lighting Europe, based in Budapest, Hungary, and in 1997, as General Manager of Worldwide Sourcing for the business, based in Cleveland. Sylvester also served as General Manager for Global High Intensity Discharge (HID) before being named President & CEO of GE Lighting Systems in Hendersonville, North Carolina, in 2000. She was then named President of the former GE Quartz in 2002, followed by the CEO roles with GE Intelligent Platforms in 2006 and GE Lighting in 2011 respectively.

Sylvester is a member of GE's Corporate Executive Council, GE’s Commercial Council and she was instrumental in helping to launch the GE Women’s Network. She is a former Chairwoman and current member of the Board of Governors & Executive Committee for the National Electrical Manufacturers Association. She also serves on the Board for Harley-Davidson, the Alliance to Save Energy, and the Foundation Fighting Blindness.

Sylvester, her husband Mike, and their 3 daughters live in Newton, MA.