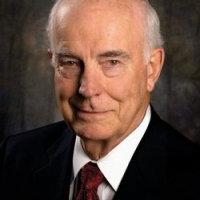 Daniel Jackson Evans served three terms as the 16th Governor of the state of Washington from 1965 to 1977, and represented the state in the United States Senate from 1983 to 1989.

Despite being a Republican and a self-styled conservative, Evans became known for his administration's liberal policies on environmental protection (he founded the country's first state-level Department of Ecology, which became Nixon's blueprint for the federal EPA) and strong support of the state's higher educationsystem, including founding Washington's system of community colleges.

Evans served as governor from 1965 through 1977, still the only governor to serve three four-year consecutive terms and the second to be elected to three terms following Arthur B. Langlie in Washington state history. He declined to run for a fourth term.

From 1977 to 1983 Evans served as the second president of The Evergreen State College in Olympia, which Evans had created in 1967 by signing a legislative act authorizing the formation of the college. In 1983, Governor John Spellman appointed Evans to the United States Senate to fill a seat left vacant by the death of longtime senator Henry M. "Scoop" Jackson. Evans won a special election later that year against Mike Lowry and filled the remainder of Jackson's unexpired term, retiring from politics after the 1988 elections.